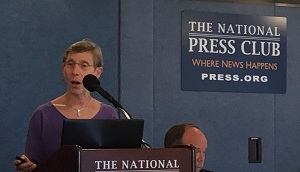 Should federal officials be allowed to interfere with commercial enterprises using their government titles? Ought they be able to promote some non-governmental organizations and attack others, all while identifying themselves as government authorities?

It’s unimaginable in almost any context. A Health and Human Services official also working on behalf of Pfizer couldn’t write a journal article about avoiding Merck drugs. A U.S. Treasury official would be called corrupt for promoting a “Goldman Sachs Guide to Getting Really Rich.” High-ranking USDA employees couldn’t work for the “Burger King Institute of Nutrition” and publish books about “Why McDonald’s Will Kill You and Also Kill Puppies.” And they especially could not do so while advertising their federal titles, granting their commercial behavior the patina of government authority. For some reason, though, government exercise officials have been allowed to perpetrate this type of behavior.

DoD civilian exercise official Patricia Deuster appears to have violated DoD regulations regarding her job title. Deuster repeatedly published work that featured her title without making the legally required disclaimer. As a result, her published works have harmed CrossFit and helped its opponents in the marketplace. This suggests that Deuster illegitimately gave the appearance of government approval to commercial behavior.

As background, Deuster is a co-author on a 2011 hit piece on CrossFit called the “Consortium for Health and Military Performance and American College of Sports Medicine Consensus Paper on Extreme Conditioning Programs in Military Personnel.” As this title indicates, the “CHAMP” piece was a joint publication from the ACSM and the Consortium, a DoD Center of Excellence and part of the U.S. Government. The article attributed high injury rates to CrossFit without actually conducting any experiments or citing any scientific evidence at all. Toward the very end, the authors declare that they have zero conflicts of interest. Yet seven of the co-authors were ACSM fellows, and the paper was published in an ACSM journal.

The ACSM and CrossFit directly compete with each other in that they both offer trainer education and credentialing (As a related example, the National Strength and Conditioning Association is another nonprofit that offers trainer education and credentials similar to the ACSM, and Federal Judge Janis L. Sammartino refers to the NSCA as a “competitor” of CrossFit in court documents from the ongoing CrossFit v. NSCA lawsuit). Deuster may have skirted past DoD regulations here, though, because the piece contains a disclaimer:

“… opinions and assertions contained herein are the private views of the authors and are not to be construed as official or as reflecting the views of the U.S. Army, the U.S. Navy, U.S. Air Force, U.S., Marines (sic), U.S. Coast Guard, or the Department of Defense.”

In light of the CrossFit v. NSCA lawsuit, it seems rather evident that the ACSM had a “financial interest” in the CHAMP piece, and that the Consortium’s role and Deuster’s co-authorship constitute official activity given her role as Director of the Consortium. Remember, she is also an ACSM fellow.

Additionally, the US Department of Justice states that:

“An employee may not use his public office for his own private gain or for that of persons or organizations with which he is associated personally. An employee’s position or title should not be used to coerce; to endorse any product, service or enterprise; or to give the appearance of governmental sanction …”

Section 3-305 of the Joint Ethics Regulation, on “Teaching, Speaking, and Writing,” section a., requires that an employee make a disclaimer including his or her official DoD title as one of several biographical details when teaching, speaking, or writing in any situation, fundraising or otherwise. Further, “where a disclaimer is required for an article, book or other writing, the disclaimer shall be printed in a reasonably prominent position in the writing itself.” The above Department of Justice page also states that “an employee may allow the use of his title in connection with an article published in a scientific or professional journal provided there is an appropriate disclaimer.”

Deuster did not follow this disclaimer requirement with her NSCA work. She edited the textbook, NSCA’s Essentials of Tactical Strength and Conditioning, and she uses her DoD title in the “About the Editors” section at the end of the book. But there is no disclaimer letting potential purchasers on Amazon know that the book does not represent the views of the DoD. We purchased an electronic copy of the book and could not find a disclaimer anywhere—beginning, middle, or end— either by looking manually or utilizing Kindle’s search function.

Additionally, Deuster and many of her other DoD colleagues have publicly attacked CrossFit while employing their DoD titles. Take, for example, the letter to the editor in Military Medicine titled “Is High-Intensity Functional Training (HIFT)/CrossFit Safe for Military Fitness Training?”—a letter signed by Deuster and her ACSM cronies. They unsurprisingly answer, “no.” And they base this opinion not on data indicating that there’s a relatively higher risk of injury with the activities in question, but rather on fear-mongering over injury potential and rhabdomyolysis. And worse, they do so with the authority of their DoD titles attached to their names. Therefore, they did not comply with DoD regulations. They made no disclaimer whatsoever stating that their letter to the editor, signed by a handful of high-ranking DoD officials, does not constitute a DoD position. We can only assume what the average reader would conclude.

Caption: Here we have DoD titles lending authority to an attack piece on CrossFit. No disclaimer.

So, Deuster and her DoD colleagues are writing on physical fitness-related topics in the context of the military, which is the focus of Deuster’s DoD job. They are writing, moreover, on behalf of private organizations and disparaging those organizations’ competitors without including the legally required disclaimer. At the same time, Deuster and company are publishing studies in NSCA’s Journal of Strength and Conditioning research. We paid the NSCA for several separate studies from Deuster and some of her DoD colleagues, such as CHAMP Assistant Director Fran O’Connor, and found zero legally required disclaimers.

We’ve submitted a formal complaint to the Office of the Inspector General for the DoD. And the DoD has forwarded the complaint to the Office of the Under Secretary of Defense for Personnel and Readiness in order to seek additional information and determine appropriate action. We trust that they will look into the matter thoroughly and enforce the regulations they currently have in place so that private organizations cannot benefit from the DoD name, especially at the expense of competitors like CrossFit.