Having stopped fitness licensure in its tracks, the CrossFit community is turning its sights to nutritional licensure. Once again, a junk food proxy stands in the way.

In the United States, 21 states restrict food speech through nutritional licensure laws. These laws are:

1. Unconstitutional: They violate the First Amendment by restricting freedom of speech. Nutritional licensure laws even have been used to restrict the speech of licensed dietitians who met all their qualification requirements but refused to follow the inadequate “calories-in calories-out” model of nutrition.

2. Immoral: These laws make it a crime to share lifesaving information about soda and other junk food, even as two million Americans die yearly from preventable, food-related chronic diseases. And licensure laws in general disproportionately harm military families and contribute to income inequality, costing Americans an estimated 2.85 million jobs a year.

3. Anti-competitive: Nutritional licensure largely traces back to a special interest group, the Academy of Nutrition and Dietetics. Not surprisingly, the AND often grants special treatment to AND-certified nutritionists and dietitians, at the expense of fitness trainers, health coaches and anyone else who would like to warn others about junk food.

The Academy of Nutrition and Dietetics: Junk Food Partner
The AND is the largest association for nutritionists and dietitians in the U.S. It’s most famous, though, for cozying up to the junk food industry. A 2016 Time Magazine piece described AND’s annual conference:

“… companies like PepsiCo and Nestle (which makes candy like KitKat and Butterfinger) will have booths near the main entrance. Other trade organizations like the American Beverage Association, the National Confectioners Association and the Sugar Association will also be on the expo floor.”

Founded in 1917, the AND has supervised a historically unprecedented explosion in food-related carnage. If you believe CDC data, the U.S. diabetes rate has increased more than sevenfold since 1958. 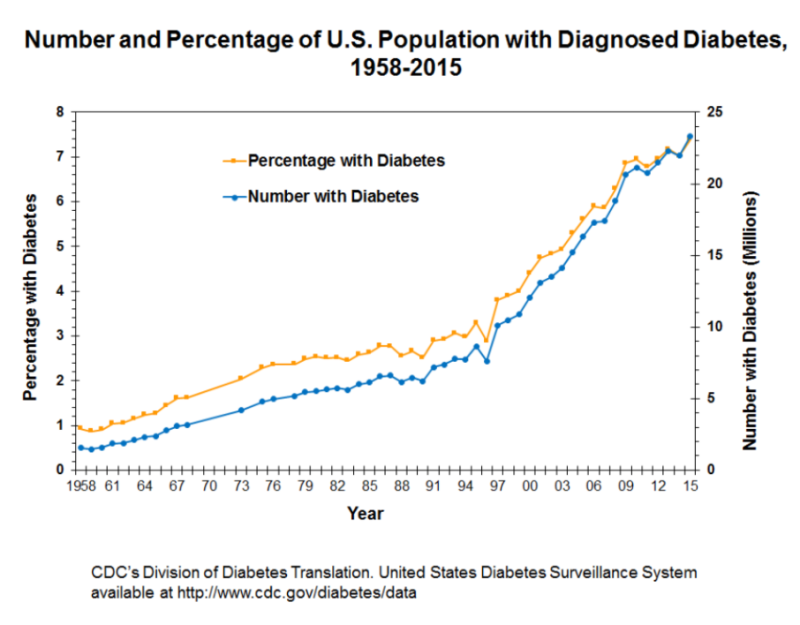 As AND-promoted nutritional licensure has spread, food-related diseases such as diabetes have grown to epidemic proportions.

Meanwhile the food and beverage industry has spent millions on misleading Americans. Former American College of Sports Medicine president Steven Blair cast doubt on the relationship between food intake and obesity in Coca-Cola’s Global Energy Balance Network. CrossFit, the New York Times, and others called Coca-Cola out for spreading misinformation. The AND did not. The AND also apparently has less integrity than Mars Inc., as the latter has attempted to distance itself from Coca-Cola’s propaganda outlets.

Michele Simon’s 2013 report, “And Now A Word From Our Sponsors,” revealed that the AND even accepted money from a Coca-Cola proxy group called the International Life Sciences Institute to literally study whether industry money affected study quality. As Simon concluded,

There can be no doubt that AND’s corporate partnerships affected the messages that reach its dietitians and nutritions. Simon reported that AND gave continuing education credits for Coca-Cola-sponsored courses. These Coke classes taught dietitians that

“sugar is not harmful to children; aspartame is completely safe, including for children over one year; and the Institute of Medicine is too restrictive in its school nutrition standards.”

And AND has sold symposium space to companies like Nestle, which presented on “Optimal Hydration.” Most shockingly, the AND agreed with Coca-Cola to “co-create, co-brand an Academy-themed informational consumer campaign,” called Heart Truth. Previous AND president Sylvia Escott-Stump was apparently quite overjoyed to attend the Coke-AND event:

Instead of going after corporations for selling toxic products and lying to the public, the dietitians lobby has decided to go after individuals such as Heather Del Castillo, a military wife and CrossFit Level 2 Trainer.

Del Castillo offered nutrition advice as a health coach in California, a state where you’re still allowed to speak freely about food. When her husband’s Air Force job caused her to move to Florida, she kept offering the same services. Then the state conducted an undercover sting operation and fined her $754. She was also threatened with jail time and thousands of dollars in additional fines, unless she stopped warning her clients about junk food. Florida even forced her to pay for the sting operation against her.

Del Castillo is suing Florida. She has enlisted lawyers from the Institute for Justice, who have an excellent track record, to represent her. But she is not the only CrossFit trainer to fall victim to the AND’s licensure laws, not even in the state of Florida.

We have detected a disturbing pattern in these nutritional speech prosecutions, ranging from Dr. Tim Noakes in South Africa, to Dr. Gary Fettke in Australia, Cassie Bjork in Minnesota, and Steve Cooksey in North Carolina. In every single case where nutritionists and dietitians attempted to suppress food speech, the victim had recommended cutting back on refined carbohydrates and added sugar. We know of no exceptions. Nor have we found a single case where the dietetics lobby ever went after the proxies of Coca-Cola, Nestlé and the like for giving patently false nutritional information. If licensure is about protecting the public, why do dietitians and nutritionists always use it against sugar opponents and never go after food industry apologists?

The AND’s arguments are consistent: Unlicensed nutrition advice presents a threat to the public. Should food, something every human being needs and will consume regardless of expert opinion, be treated like a prescription drug? More important, what is the current track record of the AND in protecting public health? From the 1960’s until today, the AND has grown in membership, influence and power. During that same period of time, our country has seen an unprecedented rise in obesity, heart disease, and Type 2 diabetes, as we mentioned earlier. These diseases have all been directly linked to the excessive consumption of refined carbohydrates, precisely what is found in the junk foods the AND seems so desperate to protect. With this in mind, what could possibly present a greater threat to public health than a monopolization of nutritional information by the AND? Yet, if one Florida bill is successful, the state’s affiliates may never have to worry about undercover paleo diet sting operations ever again. House Bill 1047 allows CrossFit trainers and other Floridians to provide,

We can safely say that most CrossFit trainers have no desire to identify themselves as nutritionists or dietitians. So, this bill would grant them the legal right to speak freely about food and nutrition, and thus to provide their members with information essential to their lifetime health and fitness.

Of course, the AND has gone on the defensive with social media posts and emails to its members, urging them to oppose free speech in Florida. The AND even has a sample letter it asks its members to send to legislators. The letter warns that if House Bill 1047 passes, then “trainers” and other professionals “would be able to administer and charge for nutrition counseling for any condition, disease or diet.”

The horror! What might happen if fitness trainers had the freedom to warn the public about the AND’s past sponsors? Might their clients reverse diabetes, lose hundreds of pounds and restore their blood pressure to healthy levels? And in the worst case scenario, it’s hard to imagine worse health outcomes than what’s already happened on the AND’s watch.

CrossFit Inc. and the CrossFit affiliate community will take an active role in Florida advocating for free speech in nutrition and House Bill 1047. Stay tuned.

In the meantime, no matter how upset it makes the Academy of Nutrition and Dietetics, CrossFit affiliates will keep reversing chronic disease. Just take the everyday miracle Daniel Long experienced at Twin Bridges CrossFit:

“I was 300-plus lb. and Type 2 diabetic when I started #CrossFit. Now I’m 195 and clear of diabetes and off all meds confirmed from my doctor. So take the statement for what it is. Put the work in the gym and the kitchen and the results will follow. CrossFit gave me the tools and the desire to do so much. It’s been a blessing for me and my family.”