Editor’s Note: We are pleased to present this guest post by Vik Khanna. 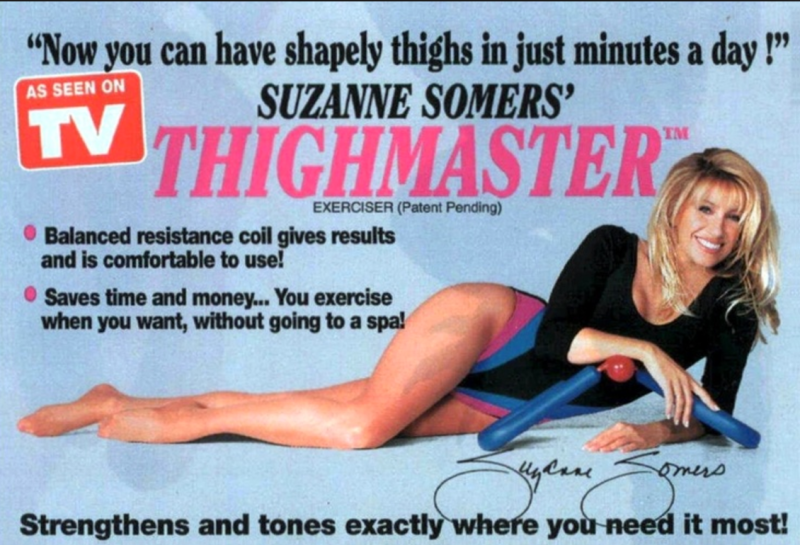 If the fitness industry in America were a single commercial product, there’s a very good chance it would get hammered by the Federal Trade Commission and state consumer protection departments as something sold to the general public under false pretenses, that is, as a fraud. Specifically, the FTC Act and state consumer protection laws require that companies not engage in false and deceptive trade practices when selling their wares to consumers. That is the fitness industry’s entire business model.

For the better part of the last 20 years, the fitness industry has engaged in multi-layered fraud that has insulted, lied to, misled, and confused countless Americans. Their malfeasance, like the most notorious pyramid marketing schemes, has many layers, each designed to influence a different audience, from consumers to employers to policymakers and the media. They have succeeded beyond anyone’s wildest dreams as academics, ostensibly non-profit organizations, and fitness entrepreneurs have become rich and influential far in excess of the actual value they’ve added to America’s public health.

The biggest element of the fraud is the simplest and most straightforward: America’s fitness industry has done absolutely nothing to help people live longer or live better. As a public health professional myself (Johns Hopkins, 1984), I believe those are the two most important endpoints when considering whether a policy or service has meaningful effect. If a product/service/strategy does not prolong life or improve quality of life, what is the point, and what is the return on investment for either a personal or societal investment in it?

There are only three reasons to exercise: it benefits you practically or economically (i.e., as in the cases of athletes with specific aspirations); you feel better when you do it (the quality-of-life effect); or, you believe (and hope) that it will help you live longer and with less disease than someone who does not exercise. For me, the quality-of-life effect is so great that you’d have to pay me a lot to not exercise. Along with that I believe my six-day-a-week training habit (now in its 43rd consecutive year), will help me outlive most of my peers.

But this trifecta of positive exercise effects eludes most Americans who remain largely insufficiently active, ineffectively active, or dangerously overactive. The inability to do just enough, but not too much, comes not from some innate, intuitive drive to be wrong, but from the confusing morass of garbage products, apps, studies, strategies, and theories from the fitness industry that are as comedic as they are meaningless. From the Thigh Master to the 7-minute workout, U.S. consumers have been sold a bill of goods by people, who, in the finest traditions of American carnival barkers, are opaque about their motivations, funding, and true intentions. There was a time when we information consumers could rely upon the publication of studies in reputable scientific journals for strategic insight and tactical guidance. The process of peer reviewing data and opinion prior to its general release exists in nearly every profession; it’s an imperfect system, because editors and reviewers, being human, have their own agendas, but it’s still better than any other system I can think of.

Fitness charlatans have, however, found a way to circumvent this gossamer system of checks and balances. They have subverted the once reliable and trustworthy–if stuffy and arrogant–peer-reviewed literature and the processes of policy making. Now, instead of just marketing nonsense to the uninformed, they leverage the worst kind of pseudo-intellectualism: they “study” something to ensure they get the desired (preordained) result, while simultaneously being opaque about funding and agenda.

They get the work published, and the mainstream media, rather than serving as a barometer of sense and sensibility, simply regurgitates the press releases. Paper authors get interviewed by the New York Times and Wall Street Journal, which provides them with the celebrity they need to be big people on campus and in the eyes of grant funders; the cycle repeats as “researchers” manipulate data and frame questions so narrowly and carefully that even the proverbial blind squirrel could find their nuts. Consequently, consumers are deluged with a stream of fitness data that applies to absurdly small, carefully selected populations (and is thus not generalizable), frequently conflicts with findings from other research, and almost never addresses any meaningful long-term health outcomes. Hence, the manifest confusion among millions of Americans who simply get lost in a ceaseless drumbeat of isolated fitness trivia that has no context or meaning and almost never improves upon the basics.

Getting work published in reputable, cautious journals was once no mean feat. Now, it’s easy as pie because the number of supposedly peer-reviewed scientific journals has proliferated to over 28,000 worldwide. This includes pay-to-publish journals that will review and publish your work for the right price. The net effect of this is that even if you were ranked last in your medical or doctoral class, someone somewhere is willing to publish your tripe. And I am not even talking about the Journal of Irreproducible Results.

Some of the world’s most important and influential scientific thinkers–including Richard Horton, who edits The Lancet, and John P. Ioannidis of Stanford (see here, here, and here)–have sounded the alarm repeatedly in recent years. The scientific literature simply is no longer trustworthy. There are no exercise scientists on the list of concerned people, but they lead the list of people we should all be concerned about.

Interestingly, superstar exercise researchers, such as Steve Blair, Russ Pate, James Rippe, et al., almost never publish studies with negative results (i.e., exercise does not work to [fill in the blank]). Of all the people who should be doing this, it’s these three, who have intentionally misdirected Americans from understanding how poor-quality diets undo health and also have promoted what we now know is an utter myth: that you can be fit and fat.

Studies with negative results would run counter to their carefully constructed and cultivated deceptive meme that the nation’s health problems are grounded in a lack of exercise (rather than stress, economic dislocation, and poor-quality diets); it would also anger their corporate sugar daddies by turning a critical gaze toward things such as excess added sugar in our diets and the consumption of too many calories of all kinds thanks to the proliferation of highly processed and fast foods. The lack of negative data from supposedly all-star researchers (in fitness, nutrition, and other health-related fields) is a plague on the integrity of the scientific process.

We know from work stretching as far back as James Fries’ landmark compression of morbidity study in 1980 that fitness prolongs and improves life. And, for the self-selected population that chooses to pursue it, it works almost regardless of the specifics of what you do. The essential operative factors are consistency, constancy, and adaptability. In most cases, the people who succeed at building and sustaining fitness have found a few things they enjoy, they do them consistently, their effort and discipline are constant, and they adapt to new or better strategies as needed. These are not most people.

Despite the widely disseminated 2008 federal physical activity guidelines, most Americans still don’t know what to do, how much of it to do, how hard to work at it, or how to make productive adaptations. People labor under the delusion that the fitness industry (their gym and its squad of personal trainers) will not only help them find the path, but that the industry’s collective knowledge is legitimate and probative. In fact, for most people the fitness industry’s collective knowledge does not amount to a hill of beans, and I can prove that.

In the graphic below, I plot three fitness-industry metrics and five commonly used and widely accepted measures of public health.  Note that the left and right axes are very different. They are as follows: 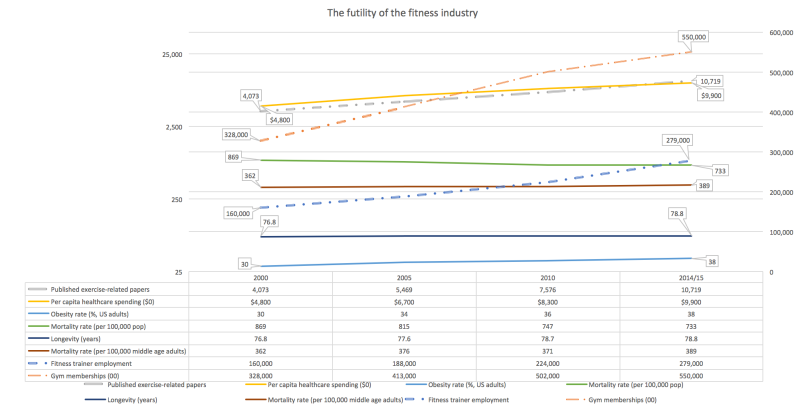 Data and a closer look at the graph are available here: Fitness trainer bls employment data (2)

Over the last 17 years, which we can reasonably define as the heyday of American fitness, the industry’s grade isn’t even a dismal F; it’s actually below failing, as this confederacy of dunces has failed to move the needle on any credible measure of population health. Seventeen years is about two-thirds of a generation and more than sufficient time to alter the trajectory of risk for the most costly and destructive major chronic diseases, such as diabetes, cardiovascular disease, many forms of cancer, osteoarthritis, back pain, and maybe even some mood disorders–in other words, the ailments that consume most of our medical-care dollars.

Meanwhile, the amount of money Americans spend on health care per capita has more than doubled. Longevity has increased from an average age at death in 2000 of 76.8 to 78.8 in 2015, an increase of a paltry 2.6 percent. Importantly, longevity has actually started to stall and reverse for the first time in modern history. The obesity and diabetes crises are now starting to bite, as epidemiologists and demographers told us they would, all while the fitness industry keeps growing in leaps and bounds. During the last 17 years, the proportion of obese American adults has worsened by more than 27 percent, which means that the aircraft carrier of longevity is far more likely to continue steaming backwards than it is turn in a more favorable direction any time soon. 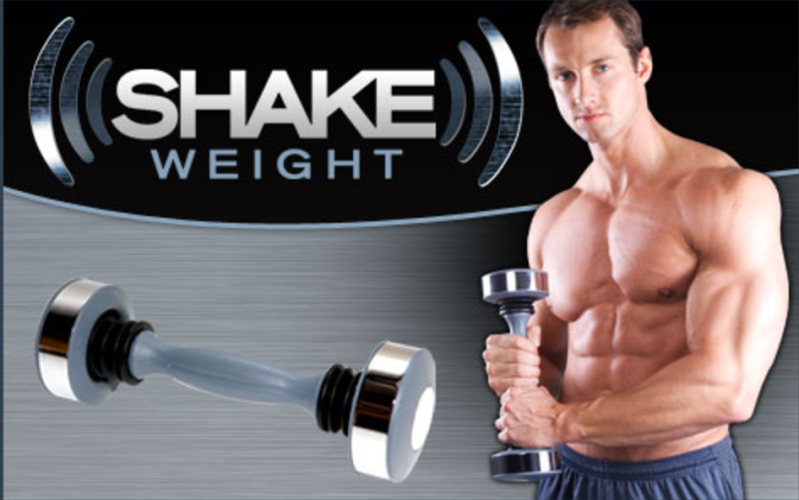 Finally, there is mortality, which is the most important measure of the effectiveness of health strategies. Among the fitness industry’s critical market–young adults (age 25) through late-middle-aged adults aged 64–the mortality rate has worsened by a whopping 7.4 percent. In other words, among the fitness industry’s bread and butter customers, the death rate now is more than 7 percent worse than it was at the dawn of the millennium. Nice work, everyone! Now, let’s get up and stretch out those limbs! Breathe in, breathe out! Feel the burn!

If this is proof of what the fitness industry can do for the nation’s public health, then God save us all.

The fitness industry is the clown car of the American health sector. Resembling the little Yugos that disgorge one buffoon after another at the circus, this clown car is driven by academics who lie, deceive, and obfuscate with the practiced insouciance of the most contemptible politicians. The backseat and cargo area are stuffed to overflowing with the minions of the ACSM, ACE, NSCA, NASM, et al., a cavalcade of incompetence whose tactics for trying to improve things include publishing “studies” in which they lie about companies that disrupt their industry. Together, they form a bubbling cauldron of such gross, bumbling intellectual inadequacy that they make witch doctors and astrologers look credible by comparison.

In my next essay, I’ll be talking about the diet and nutrition industry. Stay tuned.

About the Author:
Vik Khanna, a StrongFirst SFG, is a healthcare consultant, writer, and fitness advocate in Chesterfield, Missouri, where he runs Power Supply Kettlebell Training.