Editor’s Note: Adapted from text the Department of Health and Human Services blocked us from submitting to its public comments section.

Diabetes is skyrocketing in kids. A recent analysis of insurance company claims found,

Cases of prediabetes, high blood pressure and sleep apnea are all rapidly increasing as well. Chronic disease will limit these children’s quality of life and set them up for early deaths. These diseases can also cost millions to treat.

Don’t worry – the food and beverage industry is here to help. Enter Kidnetic.com. Kidnetic.com alleges that it aims to “promote healthy eating and active living in a way that is fun and relevant.” As its name suggests, the target market is children. 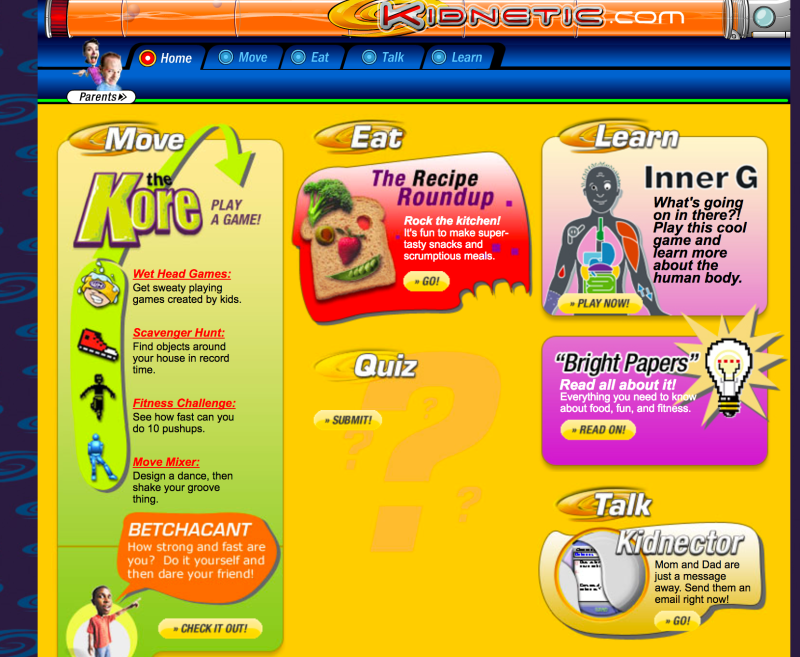 Kidnetic is marketed to kids as a reliable source of health, fitness and nutrition advice. Does it deliver? Judge for yourself with this selection of Kidnetic content:

“It’s OK to get the huge-size fries or burger when you’re really hungry or are working out a lot. But eating the biggest sizes all the time can slow you down. Most times, order a smaller burger, fries and soft drink.”

The Parent section advises How To Pack Grade-A Lunches That Kids Will Like:

“Make a backward lunch with a sandwich made with the meat and cheese on the outside and a note written in reverse telling the child to eat dessert first.”

But the star of the show is the “Eat” section, which provides recipes for high-sugar meals and then explains to kids “why it’s good for you.”

Take the “Dirt Bowl Dessert,” made from graham crackers, gummi worms and chocolate pudding. This one is “GOOD FOR YOU,” since it packs 26 grams of sugar. That exceeds the American Heart Association’s limit for total sugar consumption in an entire day. Kidnetic recommends this dose in a single item, in one meal.

That’s OK, apparently, since Kidnetic reassures children that, “If you eat smart at other meals, cookies, chips, sweetened soft drinks and candy are OK for occasional snacking.” In general, Kidnetic recommends they follow the principles of moderation and energy balance. It’s not clear how the food industry expects elementary school students to consciously balance their caloric expenditure with their caloric consumption, or to moderately consume high-sugar desserts. And since Kidnetic’s recipes exceed accepted health guidelines for sugar in single servings, moderate consumption is extremely unlikely.

For breakfast, Kidnetic recommends the “Mmm Mmmorning Sundae.” It’s “GOOD FOR YOU” because it packs 40 grams of sugar per serving.

Who approved this content? Russell Pate, Director of the Children’s Physical Activity Research Group at the University of South Carolina. Pate served as a “scientific advisor to Kidnetic.com.” This means Pate “favorably reviewed” all of the site’s content.

The U.S. government also appointed Pate as a lead scientist on the National Physical Activity Guidelines Advisory Committee. Pate leads the sub-committee for child health, despite his myriad conflicts of interest.

Coca-Cola paid Pate US$25,000 for research, Hershey’s paid him $20,000, and the International Life Sciences Institute (ILSI) provided him with at least $200,000 in funding. He has recently received funding from the Costa Rican corporation FTZ Coca-Cola Service Company. Pate also sat on ILSI’s scientific advisory board from 2004 through at least 2012. He was one of only six members on this board:

ILSI has represented the interests of the R.J. Reynolds Tobacco Company at the World Health Organization and funded misleading research that attempted to discredit sugar intake guidelines. That’s not to mention ILSI’s subversion of the Centers for Disease Control and Prevention.

As one of only six members of ILSI’s Council of Scientific Advisors, Pate has been an instrumental figure in helping the industry proxy group expand its worldwide influence. For example, ILSI sent him to Argentina to discuss obesity prevention strategies in 2008. In addition, Pate has written for Gatorade, presented for Conagra and sat on Kraft Foods’ Worldwide Health Advisory Panel for at least nine years.

This is the man the government has selected to make health recommendations for children. On what basis then can we hope that the National Physical Activity Guidelines are any more appropriate than Kidnetic.com?

The junk food industry is not the only one paying for Pate’s input. The United States government has funded Pate with nearly half a million dollars to design physical activity plans and guidelines. And Pate also is a former member of the National Dietary Guidelines Advisory Committee.

Not only does Pate suffer from rampant conflicts of interest but, he has often failed to disclose these conflicts in his research. For example, his 2011 article in an American Academy of Pediatrics journal stated he had “no personal financial relationships relevant to this article to disclose.” Perhaps Pate thinks that having received at least $200,000 from ILSI, a tobacco and soda industry proxy, does not meet that standard, but we certainly have grounds for disagreement. Indeed, Pate violated that journal’s policy, which states, “Authors are required to disclose on the title page of the initial manuscript any potential, perceived, or real conflict of interest.”

In 2013, in the New England Journal of Medicine, Pate only admitted to “receiving consulting fees from Kraft Foods.” Why did he not disclose his myriad other corporate relationships? Again, from 2004 through at least 2012, Pate served on the scientific advisory board of ILSI, an organization that has paid him at least $200,000. Pate similarly omitted his conflicts of interest regarding a study entitled “Systematic review of the relationships between objectively measured physical activity and health indicators in school-aged children and youth.”

While his other authors in those studies indicated the junk food funding they’d received at other points in their career, Pate often failed to disclose this information. For example, Arne Astrup’s thorough funding disclosures took up 12 lines in this study. Pate’s incomplete disclosures took up half a line.

It’s not possible to fully review every time Pate omitted disclosing his conflicts, since there are simply too many examples. Nonetheless, it’s worth noting how his behavior blatantly contradicts ethical standards for journals in health science. The International Committee of Biomedical Journal Editors sets standards for such journals. It clearly states:

“Financial relationships (such as employment, consultancies, stock ownership or options, honoraria, patents, and paid expert testimony) are the most easily identifiable conflicts of interest and the most likely to undermine the credibility of the journal, the authors, and of science itself.”

And now Pate threatens to again undermine the credibility of the National Physical Activity Guidelines Advisory Committee. He served on the previous 2008 advisory committee, which required that members be “free of any commercial conflicts of interest.” It’s not clear how he slipped past that policy twice. Perhaps he failed to disclose his conflicts to the government as well, and not just to scientific journals.

Still, Pate’s conflicts of interest are accessible to anyone with an internet connection. So how can the federal government select a man who facilitates junk food marketing to kids to lead a child health sub-committee?

Unfortunately, the government has banned CrossFit from even raising this question. The Department of Health and Human Services blocked us from contributing to the “public comments” section of the National Physical Activity Guidelines. Perhaps they’re upset about the speech we delivered at NIH last year on their committee’s rampant conflicts of interest.

If the U.S. government can’t ensure its guidelines are safe from industry proxies like Russell Pate, why produce them at all?