CrossFit Inc. achieved a crucial victory in its lawsuit vs. the National Strength and Conditioning Association on September 21. Judge Janis Sammartino ruled that the NSCA published false injury claims about CrossFit in its Journal of Strength and Conditioning Research. The NSCA article’s falsity is not news – we’ve proclaimed it to the world for three years. What is new is that a federal judge recognized this falsity as a matter of legal fact. 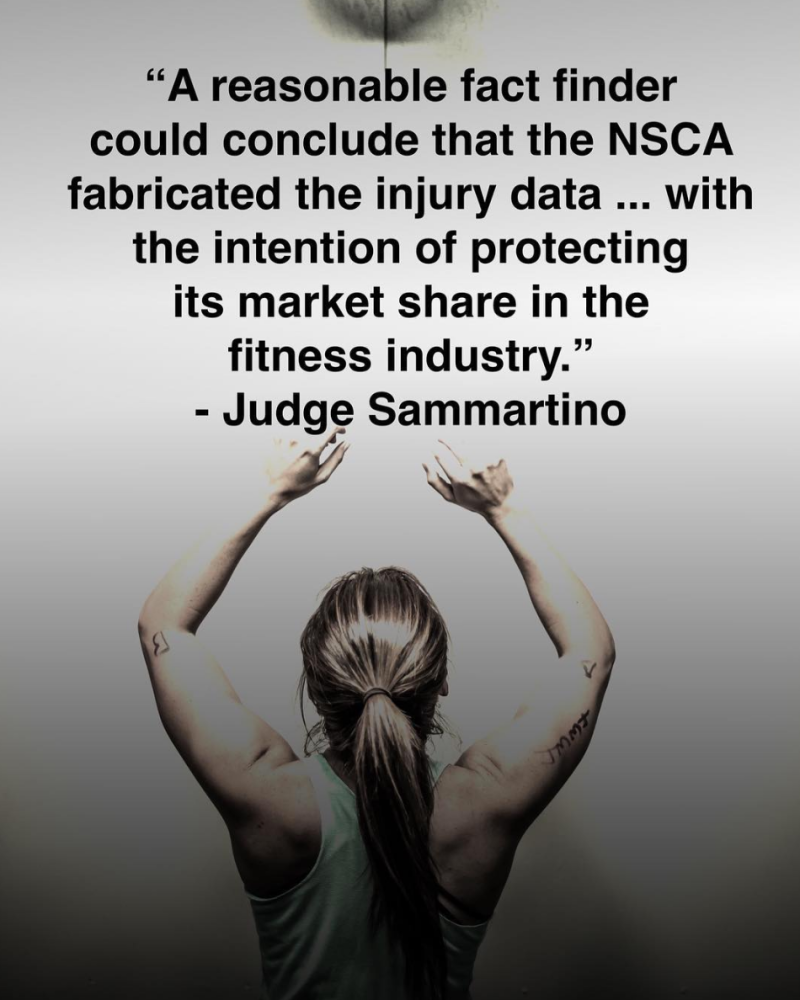 In addition, Judge Sammartino ruled against the NSCA’s First Amendment defense. The NSCA argued that scientific journals have the right to publish false information about commercial competitors without facing false advertising charges. Imagine the precedent set had NSCA prevailed here. Dell could publish that Macs cause kidney failure, and Apple could not sue them for false advertising. That is, as long as Dell published these false claims in a “scientific journal.” Strangely, NSCA argued that scientific journals should bear less accountability for publishing false information than other sources of information.

Judge Sammartino’s 20-page ruling is replete with quote-worthy lines. Take this one on page 12.

Based on the evidence in the record, a reasonable fact finder could conclude that the NSCA fabricated the injury data and published them in the JSCR knowing they were false with the intention of protecting its market share in the fitness industry and diminishing the burgeoning popularity of the CrossFit program.

Looking at the communication from the JSCR editorial staff to the Devor Study authors, a reasonable fact finder could conclude that the NSCA pressured the authors to include data disparaging CrossFit’s exercise regimen, and the editor-in-chief’s admonition—“[r]emember the paper can still be rejected if the reviewers are not impressed with the sophistication of the revisions made”—could be construed as a veiled threat that the JSCR would not be interested in publishing the Devor Study if it did not include information showing “the fact many people do get injured doing these types of workouts,” whether or not that “fact” was true in this qualitative study.

This is essential to understand: authors Steven Devor and Michael Smith submitted a injury-less paper to the NSCA. Then, as the judge notes, NSCA editor-in-chief William Kraemer warned the authors that he would reject their paper unless they revised it as recommended. Of course, these recommendations included multiple requests to include injury data.

And therefore, the NSCA does not get to pull the “but it’s a scientific journal” defense:

the evidence now before the court could reasonably support the inference that the injury data were false and—worse—that the NSCA knew they were false and published them anyway in an attempt to protect its position in the market. If a party intentionally publishes false data about a competitor’s product to protect its own market share, that speech is commercial in nature and not subject to the same degree of protection as noncommercial speech.

CrossFit has presented evidence showing the injury data were in fact false— regardless of whether the authors knew it at the time—and the NSCA has identified no evidence to the contrary. Accordingly, the Court GRANTS summary judgment in CrossFit’s favor on the element of falsity

Frankly, I was embarrassed reading some of Sammartino’s report – she elucidated the NSCA’s true motivations and behavior better than I have.

Two days later the NSCA reassured its Facebook page that everything was all right. 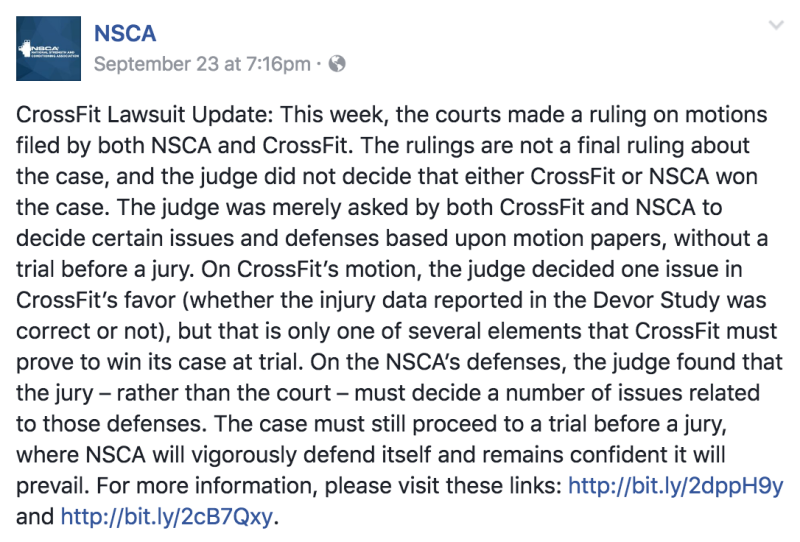 Sure, the judge ruled we published spurious injury data about our competitor, but have no fear, we can still come out on top here.

Let’s just say the NSCA’s reassurances may not have had their intended effect: 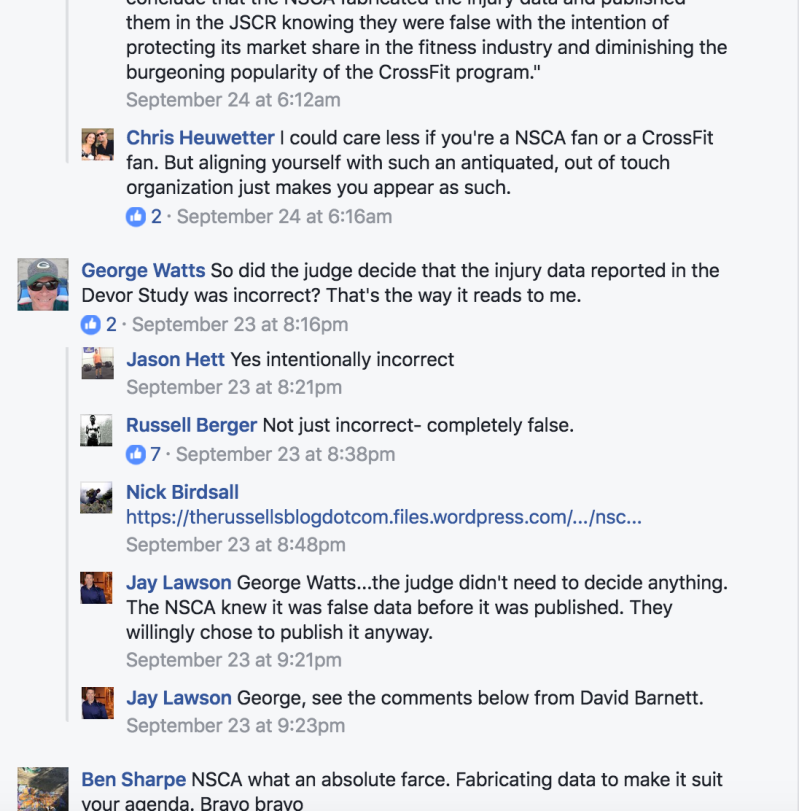 NSCA to Judge: Please Let us Appeal Your Decision Early

Exactly one week after it announced it “remains confident” about its chances at trial, the NSCA filed a motion to appeal the judge’s ruling.

Keep in mind that the CrossFit vs. NSCA case continues. Normally, a party can only appeal a case once it has been decided. When a party is so worried about its chances going forward that it wants to file an appeal before the case’s outcome is determined, however, it can file an “interlocutory appeal.”  It is like asking a refund before you’ve paid the bill.

The NSCA currently has no right to appeal the judge’s decision. So NSCA’s lawyers have to persuade Judge Sammartino to “certify” her order. Only if the judge grants their request, can the NSCA appeal her September 21st ruling.

Perhaps this argument makes sense to the NSCA’s lawyers.

We will see whether Judge Sammartino grants the NSCA’s last-ditch request. Either way, CrossFit is eager to go to trial.