A strict diet can reverse type 2 diabetes in weeks. Sound too hard? Your alternative is to live the rest of your life with insulin injections, blood sugar monitoring, and high risks of cancer, heart disease and amputations. A new diet can save you from a lifetime of misery and an early death.

Blue Cross Blue Shield appears to be spreading just the opposite message.

In a new Blue Cross Blue Shield of North Carolina commercial, “Hannah” works out in front of a Rogue rig. She stops working out, then eats an ice cream sundae inside the box.

Why would a diabetic stop eating the foods that caused her life-threatening disease when she can eat ice cream and stay sick?

“It’s just diabetes,” Hannah assures us. This is just a diabetic foot amputation: 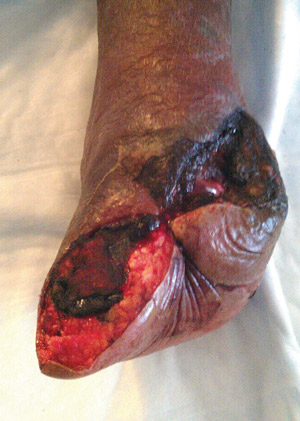 Here’s a free concept for your next video, Blue Cross Blue Shield: “Felipe” finishes his jog and lights up a Marlboro. Hey, it’s just lung cancer.

BCBS also shot the following video where a class adds flossing to its WOD. “This is the most important station,” they tell us.

This flossing video was published 29 days after an Associated Press investigation revealed that the federal government recommended flossing without any solid evidence. The Department of Health and Human Services stopped recommending flossing for the first time since 1979.

Besides, wouldn’t the BCBS post-workout sundae counteract any benefit the flossing could provide?

The insurance company doesn’t stop at targeting diabetics, though. One new BCBS commercial, titled “Balance,” takes place in a candy shop. The customers have to do squats, burpees and push-ups to “earn” their sweets. “I think you’ve earned your taffy” the candy shop man tells young girls. Then he hands the girls large packages of confectionery the girls would have to run for miles to burn off.

It might be hard to believe that Blue Cross Blue Shield would take such a cavalier attitude towards public health by promoting Big Soda’s Energy Balance propaganda. Energy balance doesn’t cut it. You can burn off all the calories you take in and still risk chronic disease. The proof is in the statistics. Over 1/5 of Americans at a healthy weight are pre-diabetic or diabetic. This figure has nearly doubled since 1994.

Surely Blue Cross Blue Shield’s promotion of Big Soda propaganda has nothing to do with the fact that PepsiCo is their customer.

Maybe this should not surprise us. Last week North Carolina fined Blue Cross Blue Shield of North Carolina $3.6 million for enrolling thousands of customers “in plans they never signed up for” and/or over-billing them. That’s on top of the $19.6 million the insurance company paid already existing policy holders and health care providers for the same errors. Nationally, Blue Cross Blue Shield faces a federal lawsuit alleging that its “37 independently owned companies are functioning as an illegal cartel.”

But spreading misinformation about what’s killing 1.8 million Americans yearly dwarfs any other sin Blue Cross Blue Shield may have committed.