And now, a new ACSM scheme. Some ACSM fellows ran a survey and found that CrossFit training had a lower injury rate than ACSM exercise. This was likely an unpublishable conclusion, so the academics ignored the higher risk associated with ACSM training and spun the data into a warning about CrossFit’s risk. This scheme only works until you look at the numbers; the article’s data directly contradicts its words.

Since at least 2008, academic exercise commentators have tried and failed to portray CrossFit as dangerous. Their efforts include baseless allegations, outright fabrication, classifying soreness as an injury, and passing off an increase in exercise as an indicator of addiction. CrossFit has exposed these schemes through a hybrid media-legal strategy that includes this blog. On the other side, the NSCA and ACSM lead the anti-CrossFit / pro-soda axis, along with their sponsor PepsiCo.

The latest NSCA/ACSM attempt is entitled “Perceived demands and post-exercise physical dysfunction in crossfit® compared to an acsm based training session.” It was published in the Journal of Sports Medicine and Physical Fitness.

Scott Drum is the lead author. Drum is an ACSM Fellow and has served as the President of the Rocky Mountain Chapter of the American College of Sports Medicine. He also has given lectures in support of the Coca-Cola/ACSM “Exercise is Medicine” program. Drum’s co-author, Randall Jensen is an associate editor for the NSCA’s beleaguered Journal of Strength and Conditioning Research (which knowingly published the fraudulent Devor article). Jensen has served as an ACSM fellow since 1995. An authorial conflict of interest is plainly evident throughout the article.

Drum, Jensen and their co-authors produced a questionnaire that 101 clients of CrossFit affiliates and 56 clients of ACSM trainers completed. Note that the CrossFit group was nearly twice the size of the ACSM group.

The abstract does not mention any risk associated with the ACSM. This is a peculiar omission given the elevated rate of injury from ACSM training in the study, which we will later examine.

ER is short for Exertional Rhabdomyolysis (rhabdo). Rhabdo can occur when muscle tissues break down after abnormally intense or high-volume exercise. It is associated with overhydration and hyponatremia, sickle cell trait, alcohol intake and other risk factors. Unlike other fitness companies, CrossFit has taught its trainers to avoid rhabdo for over a decade. The authors did not actually find a high risk of injury in the CrossFit group.

In fact the ACSM group suffered a higher rate of both severe injuries, resulting in hospitalization, and more moderate overexertion injuries. While one subject in the larger CrossFit group (N=101) reported rhabdomyolysis, the ACSM group fared worse in several other areas.

The ACSM group (N=56) was 3.6 times more likely to have stayed overnight in a hospital (3.6% vs 1%). And the rate of overexertion injury in the ACSM group was 5.4% vs roughly 4% in the CrossFit group. The authors failed to reach this obvious conclusion, however, even though they found that, “The most often reported health conditions were overexertion injuries with seven total participants (CrossFit® = 4 and ACSM = 3).”  Recall that the CrossFit group was nearly twice as large, so although the total number of injuries was higher in the CrossFit group, the rate of overexertion injury was higher in the ACSM group. These injury rate differences were not statistically significant. Neither, however, was the difference in rhabdo occurrence, yet that didn’t stop the authors from opining on how CrossFit needs to change. 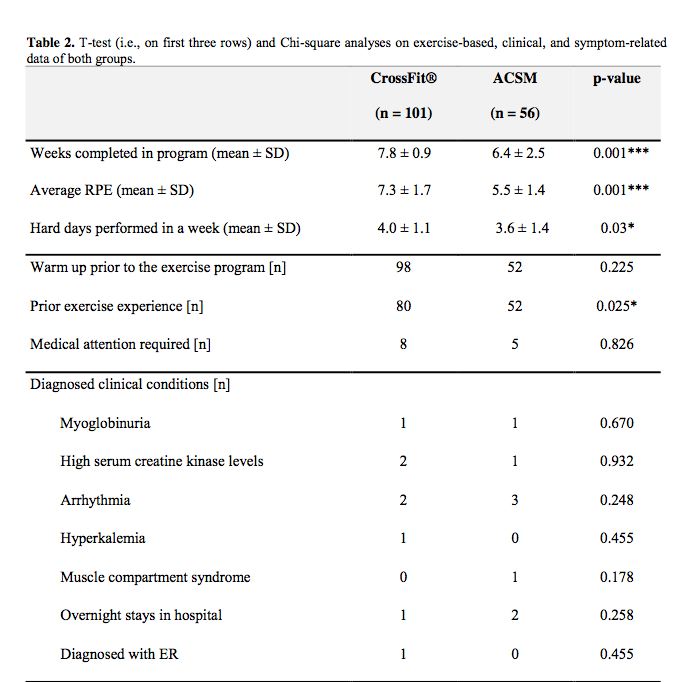 The ACSM fellow authors mention Rhabdomyolysis 46 times throughout the document. They go so far as to claim that CrossFit needs “improved training progression” to prevent rhabdo. In contrast, the authors only mention the ACSM group’s compartment syndrome once. If a single case of rhabdo means CrossFit needs to change, why doesn’t one case of compartment syndrome in the smaller ACSM sample mean the ACSM needs to change? Only the authors’ professional biases could explain this discrepancy.

Since the injury data does not justify a perception of increased risk in CrossFit, the ACSM fellows instead focus on rates of perceived exertion (RPE) and what they falsely call “severe acute post-exercise dysfunction.”

We can swiftly dismiss the RPE worry-mongering. Since the ACSM group had higher rates of both severe and overexertion injury, the higher feelings of exertion in the CrossFit group are not a cause for concern, unless that concern is directed at the ACSM group’s relative lack of effort.

As for the “severe acute post-exercise dysfunction,” much of what the ACSM fellows consider dysfunction indicates both an unscientific misrepresentation of data and an unfamiliarity with effective training. The authors included experiences that were not severe, not acute, not post-exercise, and not signs of dysfunction.

We located the pre-publication version of this article, which shows the questionnaire used. The “dysfunction” question includes experiences that occurred both “during” and post-exercise.

So it is not true that these were just experienced “post-exercise”; they also occurred during workouts. Therefore the authors have misrepresented the health implications of these experiences. Shortness of breath 24 hours “post-exercise” may indicate a severe health problem, whereas shortness of breath during a workout is a normal response. Similarly, muscle weakness during a workout may simply mean you’re tired.

At minimum the authors and editors of this Journal have a scientific and ethical obligation to correct the false phrase “post-exercise dysfunction” wherever it appears, including in the title itself. It is wrong to describe these experiences as “post-exercise” if they also occurred during exercise.

Also, “muscle soreness” is a normal response to training. Soreness is not “severe acute … dysfunction,” even if it occurs “post-exercise.” The NSCA concedes this point. Page 9 of NSCA’s Essentials of Personal Training says soreness is “not uncommon” and that it can reduce range of motion–i.e., result in “limited muscle movement.” This is especially significant since this study also classified “limited movement in muscles used during the workout,” as a sign of dysfunction. Is soreness only “severe acute post-exercise dysfunction” if it occurs after a CrossFit WOD?

While extreme muscular soreness may indicate a health problem, the questionnaire did not specify that the soreness was extreme, nor did it specifically define any other alleged signs of dysfunction.

… individual exercisers should make efforts to understand their individualized response to exercise with the suggestion they also consider working with a certified (e.g., ACSM-CPT, NSCA-CPT) exercise professional as a beginner CrossFit® participant. In general, individual exercisers are reminded to be discerning fitness industry consumers and seek out reputable health and exercise facilities with certified personnel.

Like the Devor and CHAMP articles before, and the failed attempt at lobbying for licensure legislation, this article is another attempt by ACSM fellows to drive up ACSM certification revenue. Unfortunately, the ACSM fellows’ recommendation is contradicted by the actual data. The results actually suggest that exposing CrossFitters to ACSM certified trainers could yield an increased risk of injury, to the extent that the trainers followed ACSM guidelines.

Lastly, the difference between this published article, and its pre-publication form, is striking. Before publication, this article more accurately reflected its data and thus took a skeptical approach to claims of elevated injury risks in CrossFit. The pre-publication version even stated that the risk of rhabdo in CrossFit is “most likely minimal.” In contrast, the post-publication version of this article omits that reasonable assessment, while ignoring the elevated risk of ACSM training, adding overwrought concerns about CrossFit, and inserting a plug for ACSM- and NSCA-certified trainers.

It’s sad to see what exercise scientists must do to get published.