Obesity: Does it have anything to do with diet?

Coca-Cola and American College of Sports Medicine scientists have attempted to challenge the link between dietary patterns and obesity.

On July 17th, 2015, CrossFit CEO and Founder Greg Glassman released his second tweet ever. He exposed a joint Coca-Cola and the ACSM’s project, the “Global Energy Balance Network.” 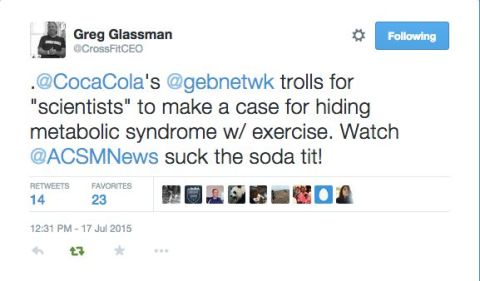 This message reached the mainstream media in August. New York Times health reporter Anahad O’Connor broke the story to the press with a front-page feature, Coca-Cola Funds Scientists Who Shift Blame for Obesity Away From Bad Diets.

O’Connor detailed how Coke’s scientists blame a lack of exercise, instead of sugar and calories, for obesity and diabetes. But Coke and ACSM’s Global Energy Balance Network goes beyond defending added sugar and processed food. These Coke scientists even challenge the idea that food has anything to do with the obesity epidemic. O’Connor cited a video where GEBN executive Steven Blair stated,

But disputing the link between food and obesity was a step too far, even for Coca-Cola science. Ten days later, Blair had retracted the video and released a statement to the Global Energy Balance Network attempting to explain himself.

Blair’s retraction is confusing, perhaps intentionally. First Blair blames the press: “a statement I made in this video has been used by some to brand GEBN as a network focusing only on physical activity.”

So did the press misrepresent Blair and the GEBN? Did O’Connor take Blair’s words out of context to spin his story?

No. Blair actually did claim there’s no “compelling evidence” linking food to obesity. And he knows it – hence his retraction. Blair admits his video qualifies as a “dismissal of diet as a cause of obesity.”

Furthermore, Blair confesses that his dismissal of diet did a “disservice” to his fellow Coke scientists at the Global Energy Balance Network. In other words, it’s his own fault, not the New York Times’.

… the University of South Carolina disclosed that Dr. Blair had received more than $3.5 million in funding from Coke for research projects since 2008.

To the Bitter End: ACSM and the Global Energy Balance Network

The otherwise excellent press about the Global Energy Balance Network missed a crucial player: the American College of Sports Medicine.

Steven Blair, Gregory A. Hand and James O. Hill helped to found the GEBN. The Global Energy Balance Network’s links to the ACSM are extensive.

For example, Blair was president of the ACSM from 1996-1997. And he’s on the advisory board of another Coca-Cola and ACSM project, Exercise is Medicine. Hand is an ACSM fellow who is featured in ACSM textbooks. And James O. Hill gave the keynote speech at the ACSM’s annual meeting this year. Consider this seven-second segment:

It’s too late for that. ACSM has already committed its 2016 annual meeting to spreading the “Basic Science of Energy Balance.”

CrossFit HQ looks forward to attending our second ACSM annual meeting. We hope to see you there. 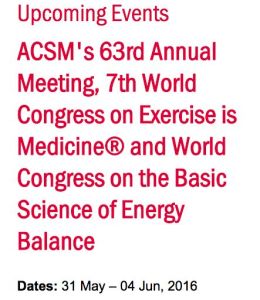