There can be no reasonable doubt that soda companies corrupted hydration science. Even the American College of Sports Medicine’s president has admitted that Gatorade funding distorts scientific objectivity. And make no mistake, corrupted hydration guidelines have caused deaths. 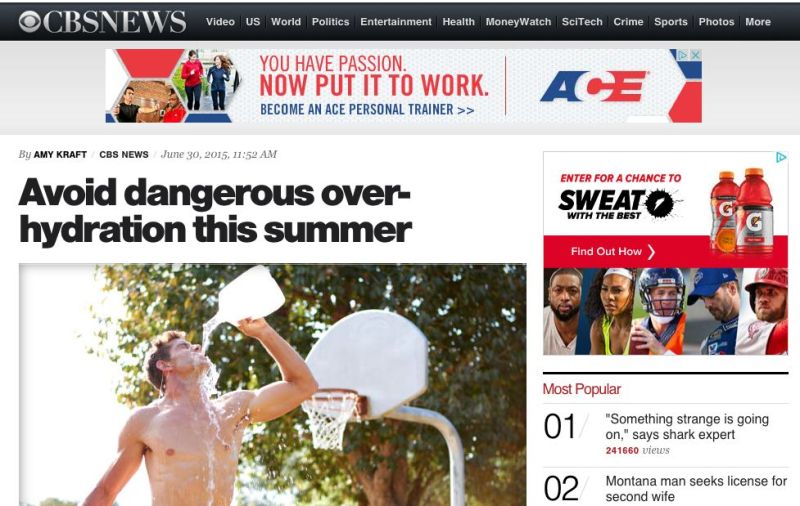 But more work lies ahead. Despite admitting there’s no evidence that dehydration causes heat illnesses, Gatorade is continuing its myth-based “Beat the Heat” campaign. And the same Soda corruption CrossFit identified and is correcting in hydration can be found throughout American health and fitness. Now the conflict between CrossFit’s 12,000 affiliates and Big Soda is playing out in politics. Big Soda continues to sponsor the same organizations lobbying to turn CrossFit affiliate owners into criminals.

As strange as it may seem, an industry whose products are estimated to kill 184,000 people every year has a powerful influence on American health science.

Good News: Cereal and Soda Consumption Are Way Down 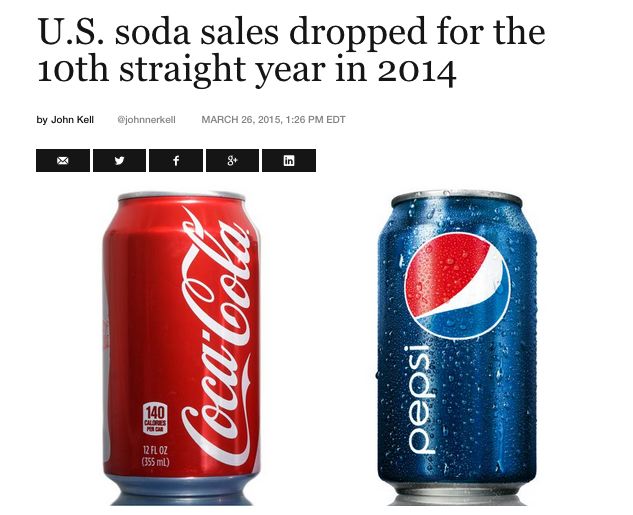 Consumers are gradually learning that products high in processed carbohydrates are unhealthy. Fortune notes that,

Sales of carbonated soft drinks slid for the tenth straight year in 2014 … The soda industry has struggled as consumers increasingly turn to juices, flavored waters, and other beverage options they deem healthier.

Companies such as General Mills have had to cut hundreds of jobs already,

Other food makers, such as Kellogg Co. and H.J. Heinz Co., also have been scaling back production, closing factories and cutting corporate overhead as they grapple with U.S. consumers trading their shelf-stable and frozen groceries for fresher food. 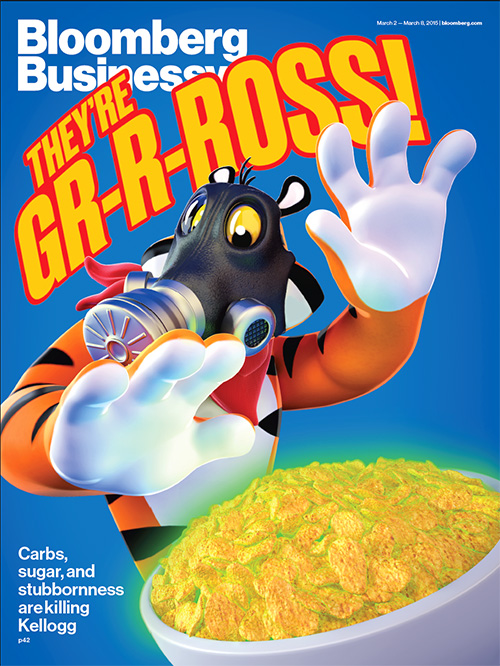 But why are consumers becoming increasingly disgusted by soda and cereal? What companies and groups are influencing them? Read the press coverage of this market change and you find paragraphs such as these from the New York Times:

Additionally, there’s a small but very active and influential group of millennials who are focused on health and don’t like processed food. Guess what, cereal companies? They want to kill you.”

Cereal sales have long been subject to dips brought on by food fads like the Atkins diet or bagel mania. And many cereals are neither gluten-free nor protein-rich, so they fail to resonate with the growing number of consumers who are gluten-intolerant or adherents of the so-called paleo diet.

How is the food industry coping? Continuing a generation-old, failing policy, they are trying to co-opt consumers’ interest in health by sponsoring ostensibly health and fitness-focused organizations such as the ACSM and the National Strength and Conditioning Association (NSCA).

And thus PepsiCo and Coca-Cola sponsor the ACSM and other health and fitness organizations such as NSCA, the American Diabetes Association (ADA), and the American Academy of Pediatrics (AAP). PepsiCo’s pushing of Gatorade as health food is explicit,

PepsiCo has reclassified its portfolio into three different product categories: “Fun for you,” which includes traditional sodas and snacks; “better for you,” typically offering low-calorie versions of its products; and “good for you,” which targets health-conscious consumers with brands such as Gatorade, Quaker, Tropicana, Aquafina, and Naked Juice, among several others.

Do you trust Big Tobacco or Big Soda’s Science? 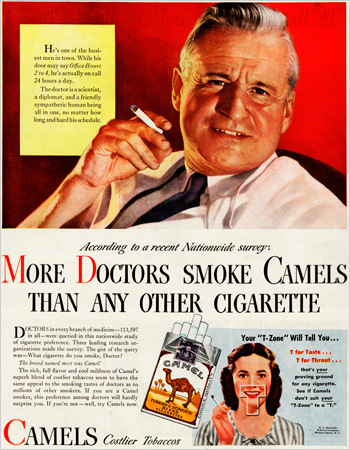 If Big Tobacco’s sponsored scientists denied that tobacco caused cancer, would you believe them?

We wouldn’t. And the same skepticism should apply to Big Soda’s sponsored scientists.

It’s worth remembering that as recently as 2003, a large tobacco company’s scientists were still claiming that “Cigarette smoking has not been scientifically established as a cause of lung cancer. The cause or causes of lung cancer are unknown.”

Is Coca-Cola’s sponsorship of the ACSM any different from the prospect of Camel Cigarettes sponsoring the American Lung Association?

Industry-tied scientists have developed a very effective strategy that protects their sponsors:

1. Hide the Risks.
2. Confuse the Public.
3. Reverse the Causation.
4. Attack the Opposition.

Does soda make you fat? Ask independent scientists and the answer is usually “yes!”

Ask Big Soda’s scientists and the answer is usually “no.” Is this disagreement an accident? Consider the following graph from Fooducate, based on this study. 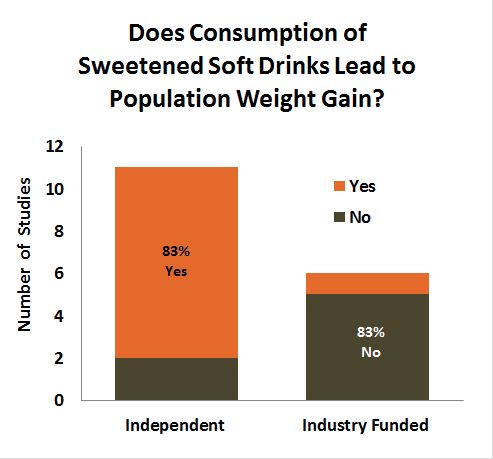 2. Confuse the Public
What about type-two diabetes? CrossFit has taken heat for warning that Coca-Cola causes diabetes. Are the critics right? Does excessive sugar consumption have nothing to do with diabetes? Again, it depends who you ask.  A Harvard School of Public Health study found that drinking soda in relative moderation significantly increased the risk of diabetes. According to this Harvard study, “drinking one to two sugary drinks per day increased the risk of type 2 diabetes by 26%.”

But what if you remove the confounding factor of obesity? In other words, if you drink soda but don’t get fat, do you still put your health at risk? The best statistical evidence available shows a strong link between sugar and diabetes, entirely independent of obesity. 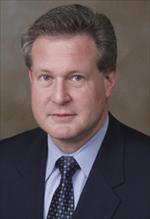 Dr. Robert Lustig, of the University of California, San Francisco, performed this study. He explains,

Epidemiology cannot directly prove causation … But in medicine, we rely on the postulates of Sir Austin Bradford Hill to examine associations to infer causation, as we did with smoking. You expose the subject to an agent, you get a disease; you take the agent away, the disease gets better; you re-expose and the disease gets worse again. This study satisfies those criteria, and places sugar front and center.

Yet again, Big Soda’s sponsored organizations seem to disagree. For example, the American Diabetes Association (ADA)  is funded by Coca-Cola.

When CrossFit Inc. made an Instagram post that linked Coca-Cola to diabetes, one diabetes “advocate” defended Coca-Cola by tweeting this ADA graphic.

Genetics influence all diseases, and besides, our genes are outside of our control. So do genetics doom some to Type 2 Diabetes? On the contrary, it is clear that Type-2 Diabetes is preventable, if you make the correct “lifestyle choices.”

The ADA claims lifestyle factors, not “too much sugar,” cause diabetes. But isn’t sugar consumption a “lifestyle factor?” So is the ADA actually disputing Dr. Lustig’s conclusion, or is it merely adding confusing language to it?

When you go beyond the infographic and read the ADA’s guidelines more closely, they do admit that cutting back on sugar helps to both prevent and deal with Type-2 Diabetes. In one bullet point, the ADA even recommends “buying less soda” to prevent diabetes.

In other words, despite the ADA’s confusing infographic, the ADA doesn’t actually dispute the ties between sugar and Type-2 Diabetes. It just prefers to focus its public messaging on abstract “lifestyle factors” than specific guidelines, such as “Don’t drink soda.”

Does the ADA’s confusing position have anything to do with its Coca-Cola funding? Would Coca-Cola still fund the ADA if it made advertisements linking soda to diabetes?

One of the most pernicious ways to mislead the public is to claim that a product solves the problem that it actually causes. For example, let’s look at the question: Do sports drinks replenish electrolytes, or deplete electrolyte levels?

Sadly, it depends if you ask Big Soda’s sponsored scientists or independent scientists (Anyone noticing a trend?)

Let’s specifically look at sodium, one of the most critical electrolytes for human health. The medical term for low sodium levels is hyponatremia. The only current, evidence-based guidelines on exercise-associated hyponatremia state,

The single most important risk factor is sustained, excessive fluid (water, sports drinks or other hypotonic fluids) intake in volumes greater than loss through sweat, respiratory and renal water excretion so that a positive fluid balance accrues over time … All sports beverages are hypotonic to plasma (typical sodium content in sports drinks are approximately 10-38 mmol/L88); thus the magnitude of excessive fluid volume ingestion will overwhelm any protective effect of the beverages’ sodium content on maintaining serum [Na+].89,90

Scientists agree that sports drinks can cause hyponatremia. So why do Coca-Cola and its sponsored organization, the American Academy of Pediatrics (AAP), claim the opposite of what the science indicates?

Independent scientists say that sports drinks cause hyponatremia; Coca-Cola and the American Academy of Pediatrics say sports drinks prevent hyponatremia. Only one side’s position is based on empirical evidence. 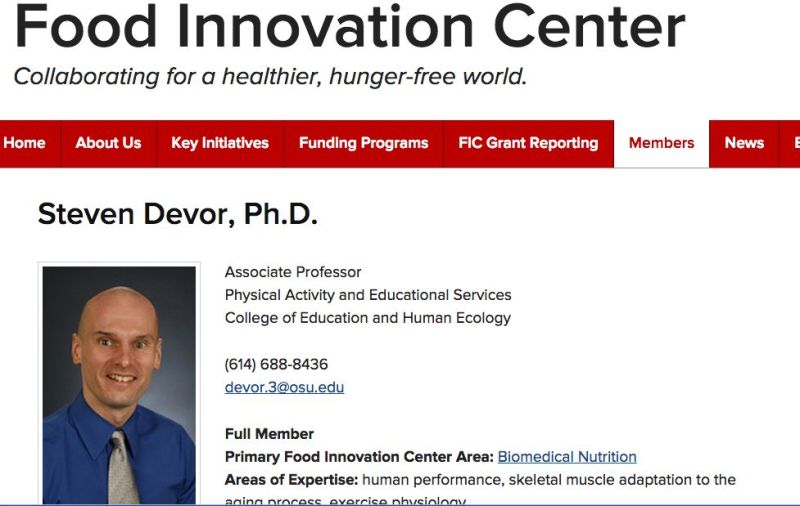 You probably know that Drs. Steven Devor and Michael Smith fabricated injury data. But it may not be immediately obvious how the Devor fraud relates to food. Not only is Dr. Devor a fellow of Coca-Cola and PepsiCo’s sponsored organization, the ACSM, but he works in the “Food Innovation Lab” at Ohio State. And the organization that knowingly published Devor’s fraudulent study, the NSCA, receives funding from PepsiCo.

Dr. Devor’s bias against the Paleo diet becomes clear in his emails to his colleagues: 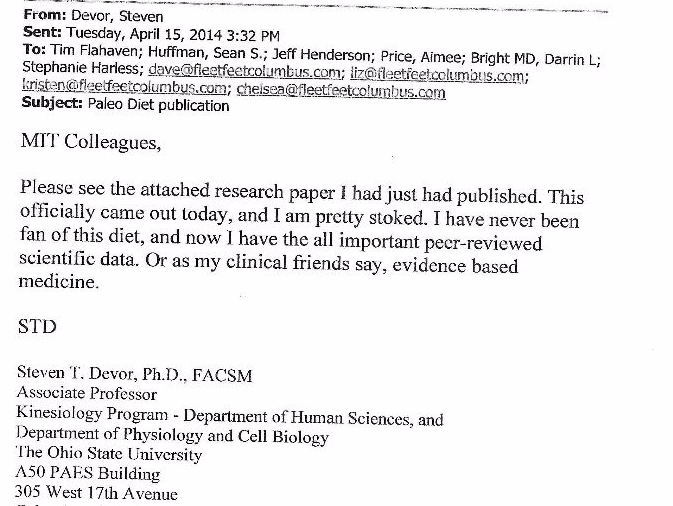 To make matters worse, when we reported Devor’s Paleo fraud to the scientific journal that published it, the journal refused to retract or even correct the study.

Can Soda and Science Coexist?

Ethically addressing fraud may be too much to ask for an American health-science industry that is funded by PepsiCo and Coca-Cola. But is there any way to keep Big Soda’s influence in American health science while still getting accurate health science? It appears not. In Part 2 we will look at how some honest scientists are successfully resisting Big Soda’s corruption of health organizations. 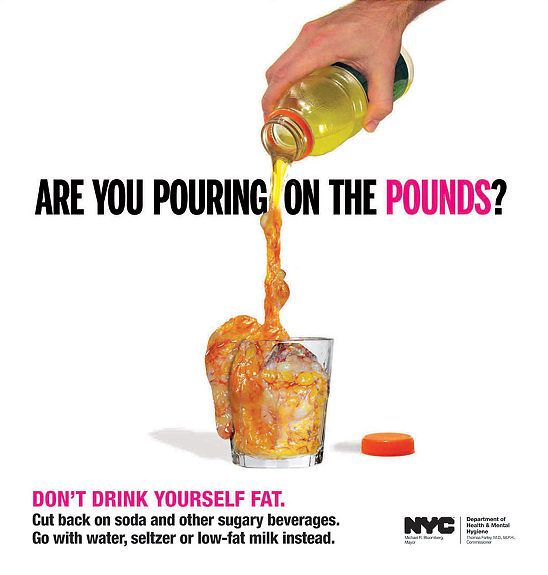