Editor’s Note: Derek Fields has worked on the Russells’ support team for a couple of years. Today he writes about what it takes to become a USREPS-registered personal trainer. USREPS is composed of ACSM, NSCA, ACE, and other aspiring competitors of CrossFit. USREPS is lobbying the government to impose its certifications on the entire fitness industry.

Now that the Russells have exposed the fitness licensure plans promoted by CrossFit’s competitors it’s time for a close examination of some of the organizations promoting licensure and their true motives.

Readers of the Russells’ blog are already familiar with the United States Registry of Exercise Professionals (USREPS), the coalition of 7 national fitness organizations that have come together to promote, as the name suggests, the registration of all exercise professionals (along with a handful of other goals). Are USREPS and its member organizations really promoting fitness licensure to protect consumers, or is it possible that their motives are slightly less noble?

Those who push for licensure often claim that the fitness industry is like the lawless “Wild West” and that consumers desperately need protection. These are, oftentimes, the same people who call CrossFit dangerous, falsely accuse CrossFit of killing 6 people, and declare that the seminar and test format of the CrossFit Level 1 Trainer credential are woefully inadequate despite evidence to the contrary. Once again, anyone who follows the blog here will recognize that criticisms like these often come from some of USREPS’ member organizations: ACSM, NSCA, NETA, Cooper Institute, NCSF, ACE, and the Pilates Method Alliance. All these organizations have one thing in common in terms of their educational credentials – they’re accredited by the National Commission for Certifying Agencies (NCCA). CrossFit’s Level 1 Trainer Seminar is, on the other hand, accredited by the American National Standards Institute (ANSI).

The sample legislation we’ve seen from USREPS is similar to other fitness licensure bills we’ve seen in the past, which seek to grant licenses only to trainers who hold an NCCA-accredited credential and punish non-NCCA-accredited trainers with fines and/or jail time. Could it be the case though that the USREPS members really do educate their trainers more thoroughly and hold them to a higher standard?

If that were the case then perhaps USREPS could make the claim that licensure bills they’re pushing were in the consumer’s best interest. They might also need scary injury data (that wasn’t fraudulent) and would have to make the claim that sitting on the couch working toward heart disease was safer than working out with a trainer accredited through a body other than the NCCA, but that is a topic for another post. USREPS’ registered trainers will openly admit that licensure bills, if passed, will drive up the cost of training and make fewer trainers available. Anyone who was forced to sit through one economics lecture (and many who have never read anything on the subject) will understand that fewer trainers + higher cost of hiring trainers = fewer people working out and more people sitting on the couch working toward heart disease.

Few people, after objectively looking at the educational standards of some of USREPS members, which are NCCA-accredited, would contend that NCCA-accreditation and USREPS membership enforces a high standard for trainer education. ACE actually has a great comparison table that’s useful for examining not only themselves, but also all the other USREPS organizations that offer a personal trainer credential, except for NCSF.

Here’s a breakdown of some of the costs, prerequisites, and exam characteristics for the six USREPS members that offer personal trainer certifications (the Pilates Method Alliance offers credentials that are relevant specifically to Pilates rather than general training).

Anyone looking at those requirements should be able to see some rather surprising numbers. First, understand that these organizations all operate under a self-study model and that a candidate for a CPT credential does not have to use any study materials or receive any kind of hands-on instruction. You only have to take the exam.

In as little as 1.5 hours you too can become a USREPS-registered Personal Trainer. How far will USREPS’ “standards” go to protect consumers? Or is USREPS’ agenda not about protecting consumers at all?

How many CrossFit L1 trainers, or trainers from other outside organizations, could pass these tests without even looking at USREPS members’ textbooks? Though supplying course material isn’t some profound educational contribution, USREPS’ organizations can at least claim that they add some value to the process in cases where trainers study their materials and actually learn something from them. However, if they’re doing little more than collecting a fee for a test then they aren’t simply upholding a rather weak educational standard. In fact, they’re acting more like the mob. They’re trying to use their lobbying power to shake down personal trainers for money.

267,000 “fitness trainers” work in the United States, as of 2012 according to the United States Bureau of Labor Statistics. The BLS also estimates that the field will grow by 13% by 2022, and other sources like IBISWorld, a business and industry intelligence resource, and CNN Money list the number of “personal trainer” jobs in the US between 259,000 (IBISWorld 2015) and 251,000 (CNN Money 2012) while listing higher future growth rates than the BLS. Given CrossFit’s staggering growth in past years and the fact that there are over 100,000 CrossFit L1 trainers as of the writing of this post both the estimated number of trainers and the predicted growth rate for personal training might be quite low. Let’s be conservative and undercut the BLS’ estimate from 2012 and work off of the assumption that there are 250,000 personal trainers in the US. In that case, how much do USREPS’ members stand to gain from licensure in the U.S.? Here’s a very conservative estimate:

Keep in mind that NCSF has the LOWEST standard exam price (ACSM charges $279 for non-members, and we know only a fraction of trainers are ACSM members eligible for their discount price). So, using a conservative trainer estimate and the lowest standard CPT exam price from the group examined in the table above we see that USREPS member organizations stand to make a staggering $62 million if every trainer were forced to hold one of their credentials. 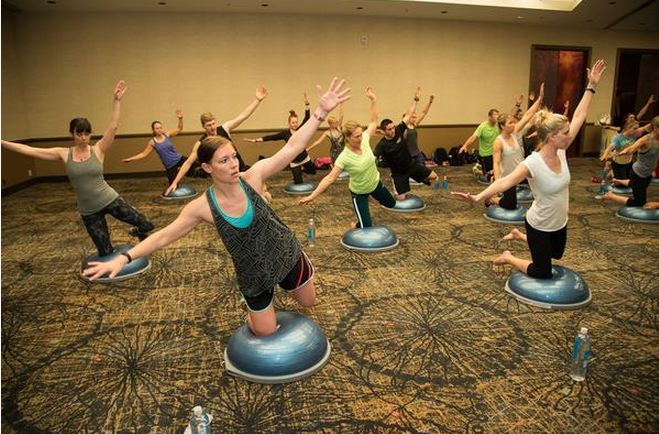 Yes, a fraction of the 250,000 estimated personal trainers are already certified through a USREPS member organization, but that means that one of the seven groups already got revenue from them. It’s impossible with the statistics available (some of the 7 member organizations do not disclose how many trainers they have) to estimate how many trainers already have the credentials they’d need under fitness licensure. Note that the $62 million estimate doesn’t take into account the higher exam prices of other USREPS members and assumes that these trainers did not purchase a single study resource.

If we account for trainers taking some of the more expensive exams and purchasing some study materials the potential revenue number skyrockets. Most of the organizations offer an exam and study materials package that ends up costing around $500, but that’s a lower estimate and CPT candidates can currently spend up to $899 for a premium exam and study package from the Cooper Institute. Since that number is at the high end of the spectrum we’ll work off of the $500 per trainer number.

Using a more realistic number for an exam and study materials increases USREPS member organizations’ potential revenue to $125,000,000. Keep in mind that this is not total organizational revenue or revenue gained from offering a new and improved product that helps customers and beats out competitors, but simply the potential extra revenue gained from passing a licensure bill that essentially grants certain organizations an oligopoly (the group form of a monopoly).

And if trainers think they can deal with licensure just by taking a meaningless certification, consider that USREPS’ bills create state fitness boards as well. This is a first step towards USREPS’ members regulating how personal trainers practice and what they teach. Will USREPS’ mandate ACSM hydration guidelines next? We can also expect that a USREPS oligopoly would further collude to raise certification prices on trainers. The trainers would have no choice but to pay these artificially elevated rates.

So, is USREPS’ licensure lobbying really about protecting consumers? Or is it about protecting a few groups from competition, concentrating benefits for a select few and dispersing costs across all Americans in the form of higher prices for personal training? And won’t the smaller supply and greater cost of fitness training mean less fitness for Americans? Take it from an NSCA credential holder who disagrees with the means of licensure but supports what he believes is their true end: