If you’re sore after a workout, are you injured? Strangely, it depends whom you ask. The National Strength and Conditioning Association’s (NSCA) Tactical Strength and Conditioning (TSAC) program says soreness is an injury. CrossFit, NSCA board members, and others disagree with the NSCA TSAC program, stating that soreness is a normal part of training.

According to the NSCA: Soreness = Injury 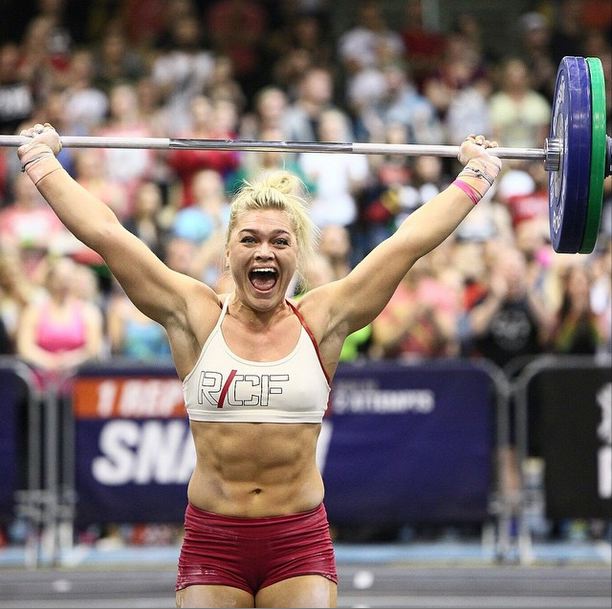 According to the NSCA, Katrin and every other Regional athlete is injured.

According to Dr. Katie Sell of the NSCA Tactical Strength and Conditioning Program, “Delayed onset muscle soreness (DOMS) is one of the most common sport-related injuries.”

The topic of Dr. Sell’s article is “Decreasing Injury Risk During Physical Training.” Dr. Sell’s article is par for the NSCA course. It contains the normal veiled attacks on CrossFit and sponsor-approved hydration handwringing. But what sticks out is Dr. Sell’s soreness = injury assumption. If soreness is indeed an “injury,” should trainers try to minimize the rate of soreness?

Dr. Sell is a member of the NSCA Tactical Strength and Conditioning Special Interest Group (SIG) Executive Council. As such Dr. Sell represents and determines the views of the NSCA TSAC program.

And Sell has company. Guy Leahy wrote an article in the TSAC report entitled “Evidence-Based Physical Training: Do CrossFit or P90x meet the cut?” Leahy grouped P90X and CrossFit into one category, “Extreme Conditioning Programs” (ECPs). Leahy admitted he lacked data to support the idea that CrossFit programming causes an elevated rate of injury. Nonetheless, he alleged that,

Like Sell, Leahy classifies cases of soreness as “injury incidents.” This assumption permits Leahy to classify everyone who became sore after training at a CrossFit affiliate as injured.

Yet soreness is not unique to CrossFit. Bodybuilders, powerlifters, strongmen, endurance athletes, and other athletes often report muscular soreness. Are they all injured?

Once you step outside NSCA’s TSAC program, fitness authors take a more realistic approach to soreness. You need not go far. 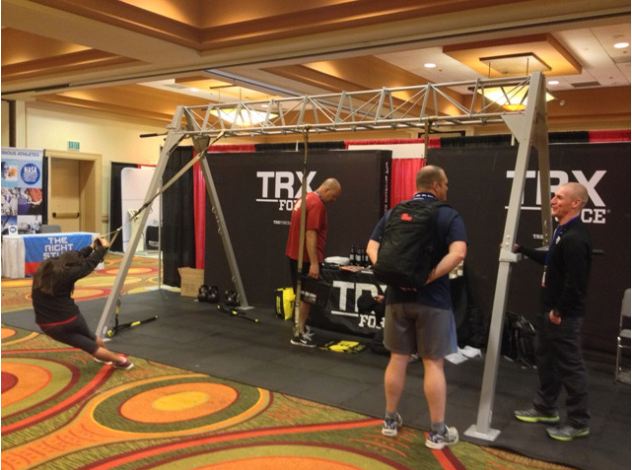 No, Soreness is Not Actually an Injury

As Lon Kilgore’s “You Be the Judge” series has exposed, the NSCA’s alleged authority figures are inconsistent on many topics. Soreness is no exception.

In their abstract Schoenfeld and Contreras note that “Delayed Onset Muscle Soreness is a common side effect of physical activity.” If they consider this “common side effect” an injury, they don’t say so.

In fact, Schoenfeld and Contreras warn that avoiding soreness may blunt the adaptation to exercise,

Avoiding soreness may mean avoiding gains. To be sure, the authors also warn of the opposite extreme, noting,

high levels of soreness should be regarded as detrimental because it is a sign that the lifter has exceeded the capacity for the muscle to efficiently repair itself. Moreover, excessive soreness can impede the ability to train optimally and decrease motivation to train.

Dr. Tony Webster, Ph.D. in Exercise Physiology and professor at Camosun College, made a similar point about avoiding soreness in his CrossFit Journal article, “Muscle Damage and Soreness: An Overview”

muscle damage and soreness are essential and probably unavoidable pre-requisites for optimal muscular adaptation. If you have an aversion to feeling sore, you can either stop doing CrossFit (not an option for most!) or reframe your attitude.

Even the American College of Sports Medicine’s Foundations of Strength Training and Conditioning textbook acknowledges soreness as a normal response to training. Describing Hans Selye’s General Adaptation Syndrome, they state,

The initial phase is the alarm phase (sometimes referred to as the shock phase) and consists of both shock and soreness. Performance during this phase will decrease. This would be synonymous to the initial effects a workout has on the athlete. The second phase is physiological adaptation to this new stimulus. The body adapts to the new training stimulus and an improvement in performance ensues. Once the body has adapted, no further adaptations will take place unless the stimulus is altered.

If soreness is widely accepted as a standard component of safe and effective training, why does NSCA’s TSAC program strangely classify soreness as an injury? This position is inconsistent with what NSCA officials have said. If taken seriously, the “soreness equals injury” assumption would make the injury rate in CrossFit and any other effective fitness program nearly 100%. Perhaps that’s the point.

NSCA and ACSM have presented no evidence that their certified trainers achieve results with their clients that CrossFit trainers fail to match. So why would the government mandate NSCA or ACSM certifications to teach CrossFit classes? The NSCA’s lobbying excuse is “safety.” 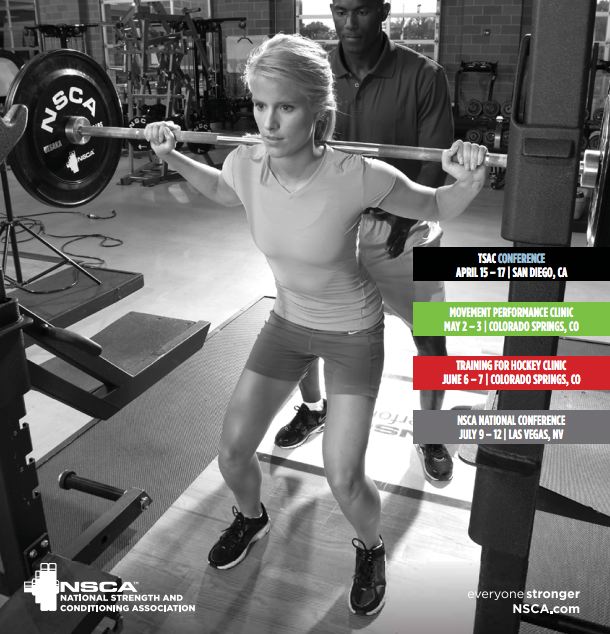 Remember Gatorade’s Michael Bergeron and the CHAMP editorial he and his colleagues penned?

The CHAMP editorial claimed a “potential emerging problem of disproportionate musculoskeletal injury risk” in CrossFit. And yet it confessed that “short-and long-term physiological, functional, and readiness outcomes or safety of ECPs has not been carefully studied.”

CHAMP published its editorial in 2011. Four years later, we have a body of published studies regarding CrossFit: Hak, Giordano and Wiesenthal, the Army Brigade study, Henrich, etc. What have they found?

In 2013 the NSCA knowingly published fabricated injury data about CrossFit. That didn’t work, either. CrossFit uncovered the fraud. The subjects the NSCA study claimed injured have all sworn to the court that they were not injured in the course of the study, and never told the researchers they were.

This is a major problem for the NSCA, since they want the government to mandate their certifications in hopes of preventing injuries from CrossFit trainers. NSCA TSAC columnist Guy Leahy reports that a major concern with CrossFit is that its trainers

are not required to possess the advanced training available from universities or esteemed organizations such as the NSCA or ACSM.

To maintain the appearance of science, NSCA is trying create some evidence of an elevated injury rate in CrossFit. Now NSCA officials claim soreness is an injury. This assumption allows the NSCA to document abundant cases of “injuries” in CrossFit affiliates.

Unfortunately, classifying soreness as an injury contradicts the NSCA’s own material, and common sense. 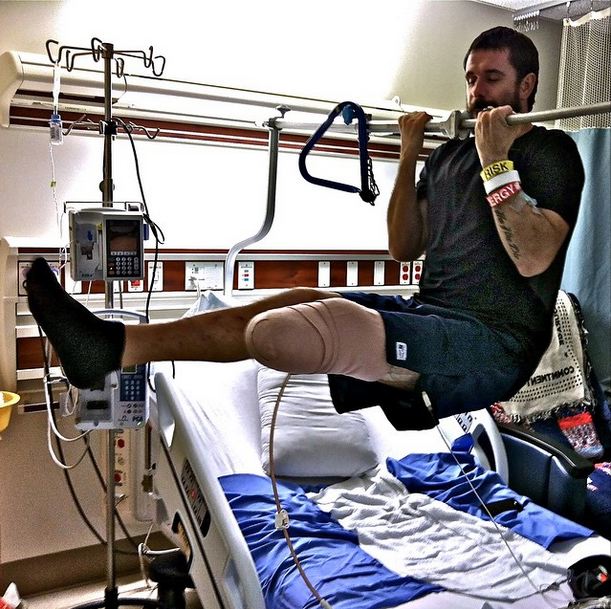 This is a real injury, but US Marine Chris Bannister didn’t let it stop him from doing 50 L pull-ups for time.