Interrogative: What should professional fitness trainers teach their trainees about performing the curl?

Instruction 5 – Elbows near side of body throughout

Instruction 9 – Elbows extended with bar on thighs at start

Instruction 15 – Flex elbows until bar is near anterior deltoid

Analysis:
Instruction 1 indicates that the hand should be supinated and the fingers and thumb are wrapped around the bar. Instruction 2, as written, allows an open grip with the thumb not wrapped around the bar. Instructions 3 through 6 describe where the grip on the weight is relative to the shoulder. All instructions consider the arm as a straight line such that the shoulder, elbow, and hand can be oriented in a line perpendicular to the floor – shoulder over elbow over hand gripping weight. This ignores carry angle, the anatomical observation that the forearm deviates laterally from a perpendicular upper arm. If the upper arm is directly under the shoulder with a fully supinated hand position, the hand cannot be. Interestingly, instruction 7 directs the trainee to retract the scapula which will narrow the width of the shoulder posture and further exacerbate grip width issues. As such instructions 3 through 7 are contradictory. 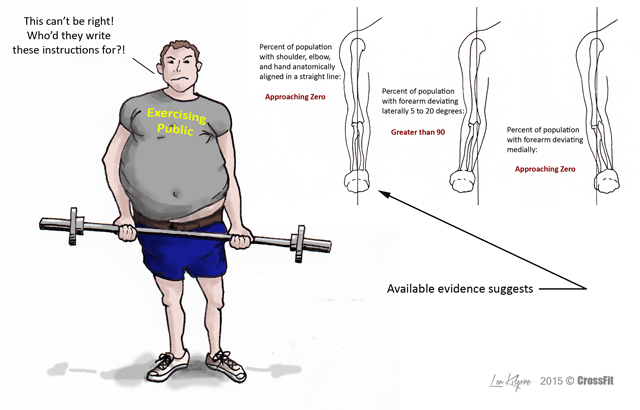 If the upper arm is directly under the shoulder with a fully supinated hand position, the hand cannot be.

Instructions 8 through 10 indicate that a complete extension of the elbow at the beginning of each repetition is correct, however book pictorial and website video depictions demonstrate incomplete extensions to as much as 20 degrees short of complete extension of the elbow. Instruction 11 suggest that the correct posture would be in normal vertebral extension, however instruction 12 indicates the proper position is with a “flat” back. Does this imply that the trainee should be coached to actively flatten the normal lordotic and kyphotic arches of the back? Instruction 13 uses a jargon term, “core”, without definition. Without defining what musculature is involved, the instruction cannot be executed properly. Instructions 14, 15, and 16 all indicate that the only movement in the curl is elbow flexion. However the end point of movement varies by source. Instruction 14 provides nothing more than “upward” as guidance with no discernible end point, allowing for incomplete or complete range of motion movements to be considered correct. Instruction 15 says near the anterior deltoid, thus specifically indicating that incomplete range of motion movement is acceptable. Instruction 16 provides the most robust instruction of the three as it indicates a desired full range of elbow motion. However, pictorial and video illustrations accompanying these instructions deviate from the written word with the weights ending point at about 6” away from deltoid in one example, another shows the end ranges of motion being complete elbow extension and elbow flexion with approximately 30o of range of motion remaining, another shows end ranges of motion being complete elbow extension at the start and elbow flexion with approximately 45o of range of motion remaining. In all descriptions the fact that the biceps brachii muscle crosses both the elbow and shoulder is ignored. Full range of motion exercise for the biceps requires elbow flexion and shoulder extension. The final conflicting issue is nomenclature, combined these sources use the name “bicep curl” interchangeably to describe barbell and dumbbell curls.

Summary:
The self-proclaimed world authoritative materials promulgated by the NSCA are inconsistent in recommendation, incomplete in scientific support, lacking definition, inadequate in anatomical description, and impractical in application. A clear and uniform description is not discernable. The said publications and recommendations create an environment where education of professionals on performing and teaching the curl is inconsistent and poorly described. Further, the name of the exercise is not consistent between publications thus increasing the amount of confusion.

The authorship, editorial, or graphical issues present may ultimately have negative effects on individual fitness results and the safety of the public, as correct technique cannot be reliably determined from the published statements, texts, and videos. 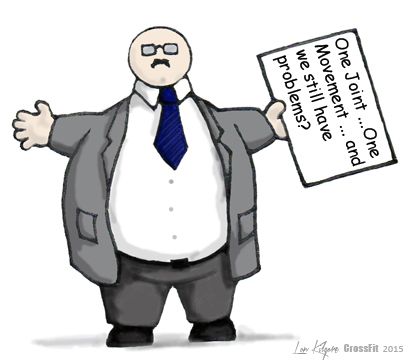 About the Author
Professor Lon Kilgore graduated from Lincoln University with a bachelor of science in biology and earned a Ph.D. in anatomy and physiology from Kansas State University. He has competed in weightlifting to the national level since 1972 and coached his first athletes to national-championship event medals in 1974. He has worked in the trenches, as a coach or scientific consultant, with athletes from rank novices to professionals and the Olympic elite, and as a collegiate strength coach. He has been a certifying instructor for USA Weightlifting for more than a decade and a frequent lecturer at events at the U.S. Olympic Training Center. His illustration, authorship, and co-authorship efforts include the best-selling books “Starting Strength” (first and second editions) and “Practical Programming for Strength Training” (first and second editions), recent releases “Anatomy Without a Scalpel” and “FIT,” magazine columns, textbook chapters, and numerous research journal publications. He is presently engaged in the most difficult task of his career: recreating the educational track to becoming a professional fitness practitioner. The second stage of this effort is the creation of a one-year university qualification in fitness practice at the University of the West of Scotland.