You may know about Richard Beddie. He lied about CrossFit and tried to extort CrossFit affiliates.

Here’s a brief summary. First, Beddie planted defamatory stories about CrossFit in the press. He even falsely claimed that “CrossFit caused six deaths.” Then Beddie promised affiliates the bad press would stop if they cooperated with his Register of Exercise Professionals (REPS).

Beddie’s scheme is similar to what CrossFit affiliates face in the States. The American College of Sports Medicine (ACSM) and National Strength and Conditioning Association (NSCA) published unsubstantiated and/or fraudulent claims about CrossFit. And they argued that they could solve this imaginary problem if the government would begin,

ACSM and NSCA would like to impose this requirement on the US Military as well as on the general public through government licensure.

What does Beddie really have to offer Kiwi CrossFit athletes like Ruth Anderson Horrell?

But Beddie and ACSM/NSCA have more in common than tactics. Beddie is in charge of an international organization that includes the ACSM and NSCA.

REPS is New Zealand’s exercise professional registry, but other countries have similar registries. For example, the U.S. is home to the US Registry of Exercise Professionals. ACSM and NSCA are members of USREPS. And three ACSM or NSCA officials are on the USREPS’ board.

Furthermore, USREPS, New Zealand’s REPS, and other national registries are members of the International Confederation of Registers for Exercise Professionals (ICREPS). And, as previously mentioned Richard Beddie is ICREPS’s chairman. See the graphic below:

What brings Beddie, NSCA, and ACSM together? They’re not just pushing for trainer registries, but also for government licensure. And inventing injuries is useful for industry interests: they justify anticompetitive actions. If Beddie, NSCA, and ACSM get the public to worry about a non-existent epidemic of CrossFit injuries, they may support laws that limit access to fitness.

And NSCA, ACSM, and Beddie would all profit enormously from such laws. For example, it would cost over $30 million for every CrossFit L1 trainer to register with REPS. Want to know why Beddie ran the risk a lawsuit to attack CrossFit affiliates? Look at the figures below and multiply them by 100,000 CrossFit L1 trainers:

To promote licensure, Beddie and his NSCA/ACSM cronies need the public to worry more about anecdotes of fitness injuries than about a real, documented crisis: obesity, inactivity and diabetes. Beddie’s New Zealand is on track to become the fattest nation in the world.

New Zealand’s One News that the diabetes epidemic will affect “nearly half a million New Zealanders” and cost more than $1 billion yearly by 2021. If the public focused on the obesity and diabetes crisis, they would never go along with Beddie and NSCA/ACSM’s moneymaking schemes.

So we know that the Beddie brigade wants to create public hysteria about CrossFit injuries. In that light, we can make sense of the non-stop series of non-sensical CrossFit stories: it’s a PR campaign. Ever notice that Beddie and ACSM/NSCA officials usually appear in these CrossFit hysteria stories to offer their “expert” opinion?

For example, take ACSM fellow, CHAMP author and Gatorade marketer Michael Bergeron. Or how about ACSM board member and also CHAMP author Walter Thompson? Thompson told NPR that CrossFit’s success is due to “infomercials.” If Thompson’s infomercial theory is correct, this would be very strange – CrossFit has never run infomercials. Beddie even tried to blame female urinary incontinence on CrossFit courses.

Beddie, ACSM, and NSCA have not provided any evidence that their programs would improve CrossFit. It is abundantly clear, however, that they do not understand basic principles of CrossFit, or even functional movement in general.

No, the Beddie PR campaign is not about evidence, or making CrossFit better. Their goal is to get CrossFit affiliates to contribute to this money-making scheme: 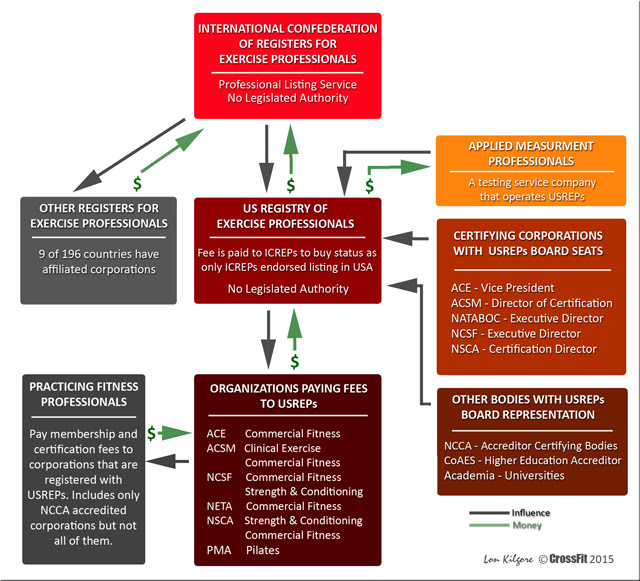