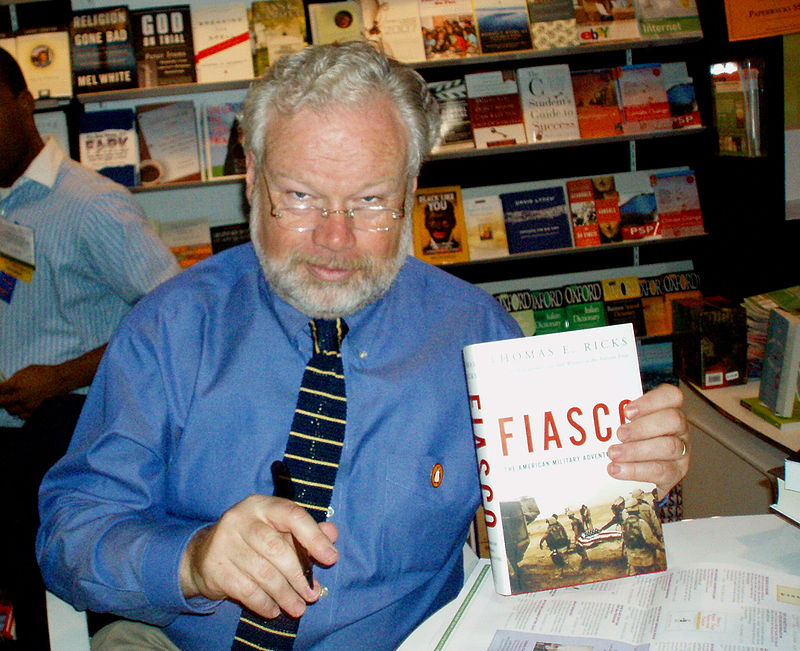 Image via his wikipedia page.

Tom Ricks has won the Pulitzer prize twice, written five best-selling books on the military and foreign policy, and is a Senior Advisor at the New America Foundation. The American Society of Magazine Editors named Ricks’ ForeignPolicy.com blog, “Best Defense” the best blog on the internet in 2010.

It’s not that much of a leap. Few would dispute that physical fitness is an essential component of military preparation. Yet the American military does not meet basic standards of health, let alone fitness:

Back to the CrossFit article on Ricks’ blog this week. Guest author Jim Gourley examined the military’s response to this problem in, “The relationship between the U.S. military and the CrossFit program.” Gourley reviewed some of the same figures and events that we’ve covered on this blog, including Dr. Katie Heinrich’s upcoming CrossFit study and General Abrams’ multi-million dollar commitment to CrossFit L1 seminars.

It’s not hard to see why the ACSM is concerned about CrossFit’s relationship with the military.

Gourley got those parts right, but two lines stand out as blatant misrepresentations of the truth:

The Army has perhaps given high intensity workouts the coolest reception, calling them “extreme conditioning programs” (ECPs) in a 2011 paper written in conjunction with the American College of Sports Medicine …

CrossFit’s headquarters published its own response to the Army’s claims.

The 2011 article that introduced the “extreme conditioning program” phrase could only be the “Consortium for Health and Military Performance and American College of Sports Medicine Consensus Paper on Extreme Conditioning Programs in Military Personnel.”

But the “Army” did not write that article. As its title states, the article was a joint effort between the Consortium for Health and Military Performance (CHAMP) and the American College of Sports Medicine (ACSM). ACSM is an aspiring civilian competitor to CrossFit and CHAMP is a small division of the Uniformed Services University.

Neither represents the Army. In fact, the CHAMP study itself states,

The opinions and assertions contained herein are the private views of the authors and are not to be construed as official or as reflecting the views of the U.S. Army, the U.S. Navy, U.S. Air Force, U.S., Marines, U.S. Coast Guard, or the Department of Defense.

This could not be clearer. There is no reasonable rebuttal to this point. The Army did not write the CHAMP article on extreme conditioning programs, and it does not represent Army or DOD policy in any way.

So getting this corrected should be simple, right? Email Ricks and Gourley, let them know the error and the evidence, and they’ll issue a correction.

I emailed this error first to Gourley, then Ricks and two Foreign Policy editors. I explained why the CHAMP article doesn’t represent the Army. Again, there is no reasonable argument on this point – the article clearly states that it contains private opinions and not those of the US Army or DOD.

We’ve found an inverse relationship between journalistic prestige and accuracy. The better known the source, the less willing it is to correct its errors. Local outlets often issue corrections within 24 hours. National publications and award-winning journalists sometimes don’t attempt to correct errors.

Neither Ricks nor his guest author Gourley has bothered to correct the article. You can read my full correspondence with each on Scribd: Gourley, Ricks.

Thanks for the info. While I did see that other army leaders are extremely pro-CrossFit, I got the sense that they’re individuals acting within a larger institution that’s skeptical of the program and risk-averse to the injury hype. Based on the research and interviews I conducted, I got the impression that the Marines were out looking for a program that would substantially improve fitness, while the army sought one that would not lead to injuries.

Gourley’s “sense” may reflect his personal experience, but it is irrelevant. No matter how he feels about the Army’s stance towards CrossFit, the Army did not write the CHAMP article in conjunction with the ACSM.

Ricks responded quickly to my concerns, at first. Then he stated that he was “still trying to understand why this is noteworthy.”

The current FP article states that the Army took an official stance against CrossFit. This would certainly be noteworthy, if true.

But that’s not true, and it actually is contradicted by its own source.

Next Ricks asked me if I would approve one line correcting the error. I sent him an accurate sentence he could use.

The following day, Ricks still hadn’t corrected his blog. I asked him if he had an idea when the error would be corrected. Ricks simply responded, “No.” So I gave him one more day before I would publicly correct his blog’s error. That time is up.

It’s too bad that Tom Ricks doesn’t care enough to report the truth.