In Part One of the Kraemer vs. CrossFit series, I introduced William Kraemer’s studies on CrossFit. Kraemer took a group of people with no experience in CrossFit and had them do modified “Linda” as fast as possible, at heavy loads, and without coaching. Their squat form improved throughout the workout, yet Kraemer’s opinion of CrossFit did not change, as I covered in Part Two. Here is Part Three:

Kraemer asserts that CrossFit prescribes the same load to all athletes. In fact, CrossFit scales each workout to an individual’s capacity.

Contrary to Kraemer’s allegation, CrossFit does not practice universal load prescription. Instead, CrossFit scales load, speed, intensity, complexity, etc. to the level of each individual.

If only Kramer had read CrossFit.com’s Start Here section, which states:

“The best results have come for those who’ve ‘gone through the motions’ of the WOD by reducing recommended loads, reps, and sets while not endeavoring towards impressive times for a month before turning up the heat. We counsel you to establish consistency with the WOD before maximizing intensity.”

It is unclear if Kraemer simply is ignorant of the most basic aspects of CrossFit methodology, or he’s aware and simply is falsely disparaging his competition. It’s also hard to tell if ignorance or malice are at play when he claims that CrossFit “differs from high intensity interval training in the modes of training that are used and rest periods or lower intensity intervals that are not incorporated in the program prescription.”

On the contrary, CrossFit does program many workouts with prescribed rest periods. Consider Fight Gone Bad, The Ghost, Tabata Something Else, or even this unnamed workout from May 21, 2014.

“As part of a larger investigation (16,38), we chose to examine the impact of a consistent relative intensity (75% 1 repetition maximum [RM]), specific to individual ability, rather than universal load prescription due to safety, in a HI/SR protocol on markers of muscle damage, inflammation, and T response in men and women”

While Kraemer made sure that the subjects had never done anything like this workout prior to running them through it as quickly as possible, he did implement some pre-tests: “Baseline testing consisted of a fitness test (2 minutes of push-ups, 2 minutes of sit-ups, and a 2-mile run) and 1RM tests for the back squat, bench press, and deadlift.”

Why classify the calisthenics and running as a “fitness test,” but not the lifting? Apparently Kraemer does not think that strength is a component of fitness, which leads to the next question: Has the NSCA defined fitness yet? How are they testing fitness without knowing what it is?

This particular study evaluated the muscular damage induced by the workout, tracking Creatine Kinase and Myoglobin levels in the blood before and at various points after the workout. Despite the fact that Kraemer disregarded CrossFit’s scaling guidelines, none of the subjects reached Creatine Kinase levels that would suggest a dangerous case of Rhabdomyolysis: 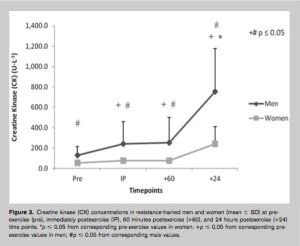 Finally, Kraemer concluded “exercise intensity and load should be prescribed on an individual basis to avoid injury and extreme muscle damage.” In other words, he agrees with CrossFit’s advocacy of scaling, though he doesn’t acknowledge it.

“Mechanics, then consistency, and then intensity – this is the key to effective implementation of CrossFit programming.” – Greg Glassman

Squatting Without Instruction
In Effects of resistance training fatigue on joint biomechanics, Kraemer discusses the form in two sets of 5 bodyweight squats, one before the modified Linda, and one after. The subjects squatted deeper and with a more upright torso before the workout. This is contrary to the mid-workout findings discussed above, for unknown reasons. Though it should not surprise anyone that beginners had trouble doing air squats after doing 55 reps each of back squats, bench presses, and deadlifts for time.

As with the weighted squats, “the subjects were given no instruction as to exactly how to perform the squat exercise.” How would some simple coaching have affected their squat form?

One of the most pernicious problems with flawed studies is that future research cites them as fact, spreading the misunderstanding.

For example, consider this sentence from “Adrenal cortical responses to high-intensity, short rest, resistance exercise in men and women“: “According to some reports these programs create high levels of mechanical and oxidative stress, resulting in performance decrements and nonfunctional overreaching.”

The only source that Kraemer cites to support this sentence is the CHAMP paper, which contains no data. Yet by claiming the existence of “reports” and providing a citation, he establishes the facade of evidence. Readers who haven’t read the CHAMP study may conclude that there actually are credible reports.

The NSCA disputes the idea that anything could be more effective than their programming. They claim that CrossFit’s methods “contradict conventional periodized resistance training models, which have proven to be effective in maximizing physiological gains such as muscle strength and hypertrophy, while minimizing the risk of overtraining.”

How does the NSCA know that they’ve “maximized” physiological gains? That would imply it’s impossible for humans to achieve better results than what is achieved through the NSCA’s programs. Who could possibly substantiate that?

Despite the NSCA’s claims of maximizing human potential, they don’t seem to have a logically consistent standard for squats. The study reports that “During 1RM testing, the subjects were asked to squat to parallel (90 degree knee flexion).” If an athlete’s knees move forward at all in the squat, which is necessary to maintain an upright torso as the NSCA prescribes, then squatting to parallel is deeper than a 90 degree knee bend. This is why CrossFit uses the relationship between the hip and the knee, and not knee angle, to evaluate when an athlete has passed parallel in the squat. Yet the NSCA acts as if “90 degree knee flexion” and “parallel” are synonymous.

The researchers also found higher cortisol levels immediately post-workout than what has been found from resistance training with longer rest periods. Would the higher post-workout cortisol levels in this study have anything to do with the fact that the subjects had no experience with this style of training?

Another interesting point about the cortisol levels reported is that they were lower 24-hours post workout than they were pre-workout, though Kraemer guesses that “baseline values may have reflected an anticipatory rise in cortisol concentrations.”

Despite the fact that the workout resulted in lower cortisol levels the next day, Kraemer raises concerns about CrossFit causing harmful levels of cortisol.

“Such prior findings and the results of this study raise concerns about the role of excess circulating cortisol in the body, with the saturation of so many target receptors having potential negative implications on muscle growth and repair processes and immune suppression, making the recovery time course less than optimal …

As shown in the current investigation, high-intensity, short rest protocols elevate cortisol concentrations well beyond what is typically seen in response to resistance exercise protocols using lighter intensities and longer rest intervals. This has potentially serious implications in muscle tissue growth, recovery, and immune processes because of the catabolic effects of cortisol.”

Kraemer’s idea for further research is to program CrossFit workouts “without programmed rest days” in order “to determine whether a chronic elevation of resting cortisol concentrations occur.” Again, it’s hard to see how this research is relevant to CrossFit. CrossFit includes rest days. Kraemer is imagining a straw man program, instead of testing what CrossFit actually recommends.

He also interprets the results of this study to conclude that “HI/SR protocols may be best suited to the well-trained athlete who already has a level of fitness commensurate with the demands of this protocol.”

This begs the question: how should someone go about obtaining this “fitness” other than performing similar workouts with gradually escalating levels of intensity?

And without having studied the implementation of CrossFit workouts in periodized or non-periodized programming, Kraemer asserts that

“the primary implication for future research is the need to incorporate HI/SR protocols into a periodized resistance training program… Although short rest protocols have benefit and certainly have their place within an athlete’s training arsenal, the findings of this study suggest that their greatest benefit may arise when incorporated into a periodized strength and conditioning program, which allows for adequate train-up, rest, and recovery.”

What evidence would support this assertion? The cortisol levels the day after the workout were lower than they were pre-workout. If this trend continued, CrossFit would be an effective agent for lowering cortisol, not raising it.

Kraemer’s conclusion does not follow from the data. He has not tested a periodized routine with HI/SR and compared it with a non-periodized routine, and thus cannot make any conclusions or recommendations regarding this decision.

In Part Four, I cover Kraemer’s claim to have first described CrossFit’s methodology in 1987.