In Part One of this series I began my review of William Kraemer’s studies. As I covered then, Kraemer is the corresponding author for 4 studies on CrossFit published in 2013 and 2014 in the Journal of Strength and Conditioning Research. While Kraemer’s studies don’t contain fraudulent injury data, they reach some illogical conclusions and make false claims about CrossFit’s methods. Here they are:

Kraemer put subjects with no CrossFit experience through a modified “Linda” workout, and had them go fast as possible, with heavy weights, and without coaching.

Despite Kraemer’s blatant disregard or ignorance of CrossFit’s guidelines, no injuries were reported. Perhaps the results surprised Kraemer. He hypothesized that:

“If both cardiovascular and local muscular fatigue results in reduced proprioception, the combination of both stimuli in these extreme conditioning protocols could be a concern. Further, when these programs are performed with higher loads and with complex movements, the alterations in proprioception could be even more significant than has been previously shown. Based on previous literature, this would result in erratic movements and in an overall decline in range of motion, significantly affecting the safety and efficacy of such programs.“

Kraemer’s hypothesis that form would change due to an accumulated workload was correct, but form actually moved in the opposite direction than one would expect. 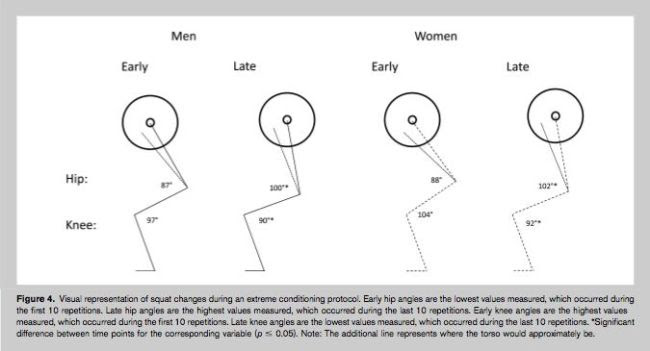 The later sets of squats in modified “Linda” were more upright and deeper. Awesome, right? One could have concluded from this data that a timed CrossFit workout improved the subjects’ form.

But Kraemer instead concludes:

Kraemer preserves his “erratic” form hypothesis despite the squat form improving. Imagine if the results were reversed, and that the athletes leaned forward more and squatted less deep as the workout progressed. Would Kraemer not have also concluded that CrossFit training resulted in erratic form? The only way that the study could have falsified Kraemer’s “erratic” hypothesis is if the joint angles had stayed exactly the same throughout every single repetition, nearly an impossible feat in any style of training.

Further, this paragraph reveals another key difference between Kraemer’s study and CrossFit. The researchers did not prescribe a range of motion standard for the squat. The subjects simply squatted as deep as they felt like.

From the graph above, that did not result in full range-of-motion squats, contrary to CrossFit’s standards. The CrossFit Level 1 Training Guide refers to the need to break parallel in the squat at least 11 times. Here’s one example of many:

Note that even CrossFit’s example of an unacceptable, above-parallel squat is deeper than either of the graphs from Kraemer’s study.

So, we know that the subjects squatted higher and leaned forward more in the set of 10. Had they been training in a CrossFit affiliate, a coach would have already shown them a proper range of motion standard, and the coach would have encouraged them to go deeper and stay upright. In other words, the subjects probably wouldn’t have waited for the final few sets to improve their form. Still, the data shows that “the negative effects of fatigue have the potential to be overcome.” Indeed, if this were false, mid-workout coaching would be nearly pointless.

Now let’s consider Kraemer’s conclusion that the fault for the athlete’s form was the number of repetitions, and not a lack of coaching, inappropriate scaling and intensity levels for beginners, and a lack of a range of motion standard. As he puts it:

“The technique changes that occur in high repetition sets do not favor optimal strength development and may increase the risk of sustaining an injury, clearly questioning the safety and efficacy of such resistance training programming.”

What’s essential to realize is that the first set of 10 squats, the ones with the worst form, occurred in the very first set of the workout: “Seventy-five percent 1RM was used on each of the 3 lifts: back squat, bench press, and deadlift. The subjects began with 10 repetitions of each lift …”

Thus the first part of the workout, where they found the worst squat form, was identical to doing a simple set of 10 squats.

Surely an esteemed “authority” in exercise such as the NSCA would not advise such a dangerous rep range, right? Well, here are their strength training guidelines for children: 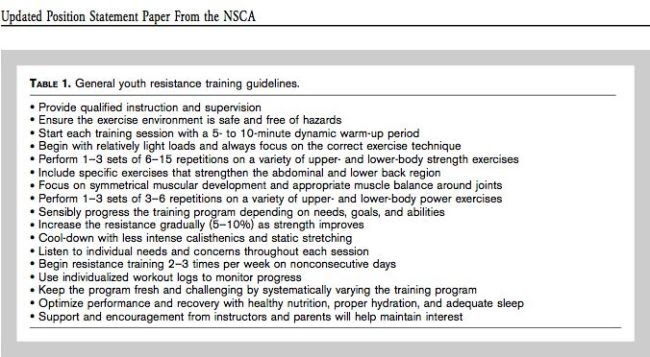 As for adults, the “NSCA’s Guide to Program Design” states, “It is recommended that novice to intermediate lifters resistance train with loads corresponding to 67% to 85% of 1RM for 6 to 12 repetitions.”

This workout’s first set of 10 squats at 75% 1RM fall squarely within the NSCA’s strength training guidelines. It’s hard to understand why a set of 10 back squats is safe when the NSCA prescribes it, but unsafe when it’s inspired by CrossFit.com programming.

In Part 3 of this series, I cover how Kraemer falsely accuses CrossFit of practicing “universal load prescription.”